Lambeth Council has won a special London in Bloom Award for its floral displays on the South Bank along the route of this summer's Tour de France. 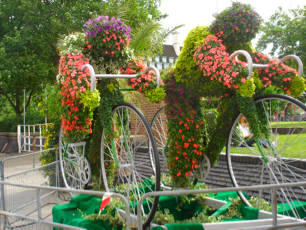 The special award was given for Lambeth's contribution to the Tour de France, with the centrepiece of the borough's efforts being a special giant floral display of two racing cyclists that was installed in Belvedere Road for the Tour de France's Grand Depart in early July.

The structure, which was over four metres long and 2.5 metres high and had its own irrigation system, was the work of Dave Paul, the council's parks client contract manager, and his team, as well as Dave Williams, Robert Allan and Robert Presnell from Veolia Environmental Services. It was prepared at Veolia's depot in Archbishop's Park.

The front rider wore the famous the yellow jersey and the rear rider wore the white and red polka dots of the King of the Mountain jersey. The display was then moved to parks and streets around the borough throughout the summer. It has recently been seen in the centre of the Lambeth Bridge roundabout.

"This is wonderful news for Lambeth, and I'm delighted that the hard work that staff, residents, businesses and community groups put in all year round to create a more attractive borough has been recognised," says Cllr Lib Peck, cabinet member for environment and culture on Lambeth Council.

"The council is determined to create a better environment for all those who live and work here, and it is fantastic to get this recognition."

Veolia Environmental Services' senior contract manager Robert Seear added: "This is a fantastic example of how well we work in partnership with our colleagues at Lambeth Council.  A lot of effort went into our activities for London in Bloom and the Tour de France display and it is very pleasing that we have been singled out for special praise."