The downstream Golden Jubilee Bridge between the South Bank and Charing Cross has had its lighting turned yellow to celebrate the Tour de France's return to London. 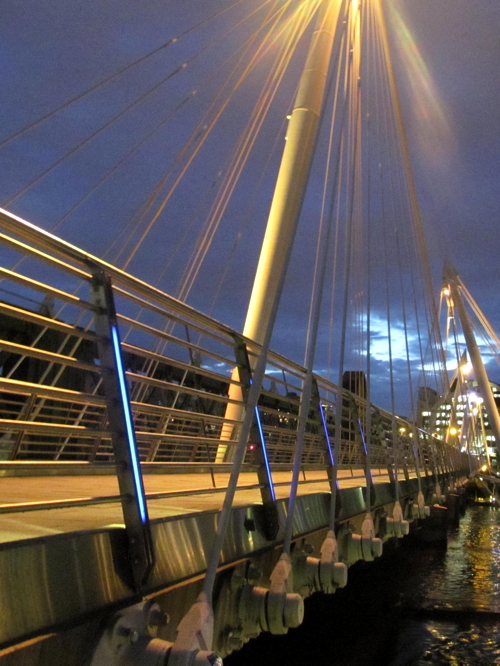 The Mayor of London Boris Johnson said: "With only one week to go until the Tour de France reaches London, we are bringing some jaune of our own to proceedings.

"Landmarks from Marble Arch, the BT Tower and even DLR trains are turning bright yellow to welcome the world's elite cyclists to the capital.

"We proved in 2012 what a fantastic show our city is capable of putting on and with the anticipation building I'm in no doubt that Le Tour in London will be a triumph."

The Tour de France comes to London on Monday 7 July after two stages in Yorkshire. Around 200 elite cyclists will travel from Cambridge, through Essex and into London before a spectacular finish on The Mall.

Unlike the Tour de France's last visit to London in 2007, the cyclists will not be coming south of the Thames.

However, the race route along Lower Thames Street, Upper Thames Street and Victoria Embankment means that three key river crossings will be closed during the day.

Tower Bridge, Southwark Bridge and Westminster Bridge will all be closed to traffic from 10am on Monday.

A special diversion route for drivers who would normally cross Tower Bridge on the Inner Ring Road to avoid the congestion charge zone will be provided via Blackfriars Bridge.

Garrett Emmerson, chief operating officer of surface transport at TfL, said: "We've been working long and hard to plan for the return of the Tour to the capital and now we are asking Londoners to start their planning too.

"London will be open for business as usual and we will help by keeping the capital moving, however, roads around the race route will be extremely busy, so we're asking people to plan ahead and preferably use public transport to make the most of what I'm sure will be an amazing day, helping to further cement London's growing reputation as a major cycling city."

Where are the best places for SE1 locals to watch the Tour?