SE1's first Tesco Express opened its doors at 8am on Friday morning. The store is part of the Empire Square development in Long Lane. 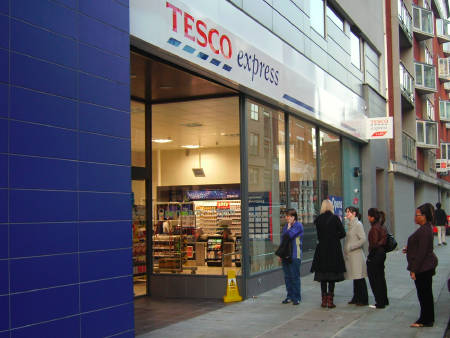 As the staff completed cleaning shelves, the manager pulled the malfunctioning automatic doors open a few minutes after 8am on Friday morning to let in the first ten customers.

At 7.55am there had been just five nearby residents standing outside. Only one had come by car and was disappointed at the lack of parking.

The first day saw a restricted choice of newspapers with no copies of The Daily Telegraph or The Times available.

The new Tesco has both a cash machine and a self-service coffee machine.

The shop will be open from 7am to 11pm daily.

The new Tesco Express occupies just a small part of what had been intended as a much larger 17,000 sq ft supermarket at Empire Square (aka Tabard Square). Last month Berkeley Homes obtained planning permission to use the rest of the unit as a health club. Soho Gyms will open in the new year.