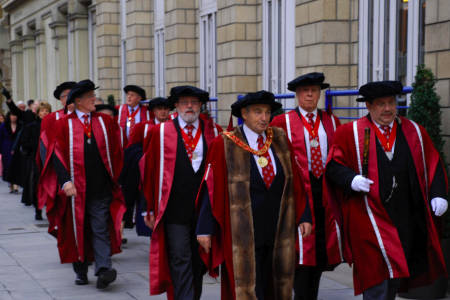 Jurors were summoned by the High Bailiff of Southwark Charles Henty to appear before the High Steward of Southwark His Honour Judge Peter Beaumont on Wednesday "at 3.20 of the clock in the afternoon precisely" at John Marshall Hall.

It is many years since the Court last sat in the Manor of Paris Garden which is some distance from the Guildable Manor in the Borough Market area.

Many of the court's ancient duties are now undertaken by Southwark Council but the Court Leet retains its right to sit for business including "the traditional appointment of officers" as a limited jurisdiction under the Administration of Justice Act 1977. Officers include a fleshtaster and two aletasters.

The High Steward's charge to the jurors took the form of an address on the history of the office of the Recorder of London which is also held by Judge Beaumont.

Earlier Frederick Trowman was installed as Foreman for the coming year in succession to Cyril Levy.

Guests at the Annual Court Leet Luncheon held at the Bankside Restaurant in Sumner Street included the Archdeacon of Southwark the Venerable Michael Ipgrave. Afterwards robed officers of the Court Leet, who included Cllr Ian Wingfield, walked in procession with a police escort along Southwark Street to the court sitting at Christ Church.