The derelict York House opposite St Thomas' Hospital was one of the buildings chosen by UNISON for its guerrilla film projections on Monday night to bring to life the impact of the likely cuts in public sector funding. 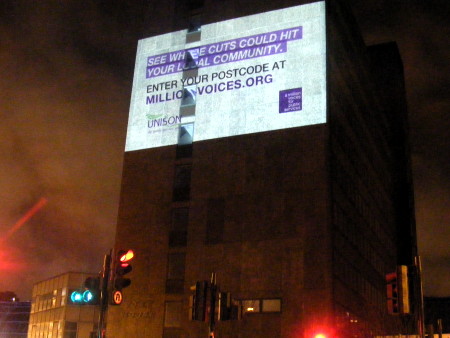 Public buildings and major tourist attractions in London, Birmingham and Manchester will be lit up this week with the union's latest campaign advert.

The adverts – a 60 and 40 second film, one aimed at potential members and the other at the public – graphically depict the campaign's key theme: how life is changed for the worse when public sector jobs are cut.

"Public sector cuts are looming large, and UNISON's new ads shine a light on the story behind the facts and figures," says general secretary Dave Prentis.

"Why should hard-working people pay for the recession when the bankers who caused this crisis are still getting billion pound bonuses? It is not right that services are being axed when the super-rich can bend the rules and avoid paying their fair share of tax."

York House has been boarded up for a number of years. Plans to redevelop the site have been halted by the recession.