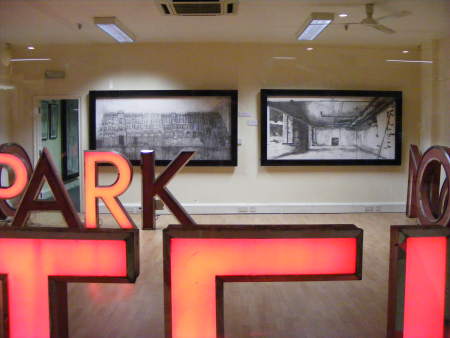 The local artist has been recording the changes in the area's landscape with large-scale drawings.

Britain's first shopping centre is now host to Powell's new gallery and studio where some examples from his growing archive of the regeneration process are exhibited for the first time.

In January an exhibition of his earlier work, supported by developers responsible for the £1.5 billion regeneration, was staged at the gallery at Morley College. The London Park Hotel's distinctive illuminated lettering on show at the exhibition is now in the shopping centre studio. The hotel, opened in 1897, is making way for a 44-storey residential tower which will include a new home for Southwark Playhouse.

Posted up in the gallery entrance are accounts of life in the hotel including memories of one of the last guests who had earlier escaped from a one of Saddam Hussain's prisons. There is also a report of life in Walworth in 1927.

Reuben Powell feels that as a long-term Elephant & Castle resident he is in a unique position to be able to capture the key moments in the history of one of Europe's largest regeneration schemes.

At his new studio there are limited edition prints of the drawings are for sale, framed and unframed. Also included are some tin paintings from his Thames River series and associated prints.

The Hotel Elephant gallery, on the Elephant & Castle Shopping Centre's upper level, is open Monday to Friday 10am to 6pm.