Ken Livingstone is the clear front runner in a wholly unscientific opinion poll carried out by a new hotel cocktail bar just a hop, skip and a jump from his old GLC HQ at County Hall. 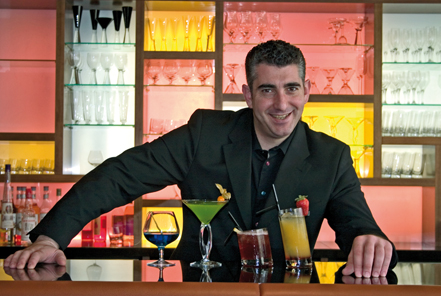 A quarter of a century ago Ken Livingstone ran London from County Hall, yards from the new Park Plaza hotel

The Spectrum Bar at the Park Plaza County Hall in Addington Street has adopted a time-honoured pre-election publicity stunt and created a range of potent drinks to mark the 1 May elections.

The red cranberry and pomegranate concoction by mixologist Fabio Fraticelli has outsold its blue, yellow and green competition.

"There is also a lot of gin in the 'Ken Livingstone' which may be part of its appeal," says Fabio.

Mr Livingstone's closest rival in the real contest, Boris Johnson, will take little comfort from customer reaction to the cocktail named after him.

"I am sure Boris will be hoping the capital's voters will take a better shine to him on May 1st. But it's a long way from the bar to the ballot box," says Fabio.

"I created the 'Boris Johnson' for its electric blue colour. It contains an exotic twist of sambuca, vodka, Galliano and Blue Curacao. I thought it would be more popular but older ladies do seem to like it." The cocktail sports a lemon rind for Johnson's blond mop.

The Lib Dem candidate – former Lambeth police chief Brian Paddick – will take heart from the Spectrum bar's poll – managers say that almost as many customers chose to imbibe his amber tequila with a pink tinge, as they did the 'Red Ken'.

And what about Green candidate Sian Berry? "I'm quite disappointed," says Fabio. "I thought the lip-smacking combination of Midori and lemon would go down a treat, but so far not one single person has ventured to try the cocktail. I think there is something lacking in the ingredients."

The four cocktails are priced at Ł7.95.

The Park Plaza County Hall opened in February just across the road from the former home of London's government on the South Bank.

Ironically Tory candidate Boris Johnson now has his campaign headquarters in the building where Ken Livingstone used to run the Greater London Council.