Cllr Caroline Pidgeon (Lib Dem, Newington ward) is hoping to oust Labour's Val Shawcross from the London Assembly in the Lambeth & Southwark constituency on Thursday. We put some of your questions to her. 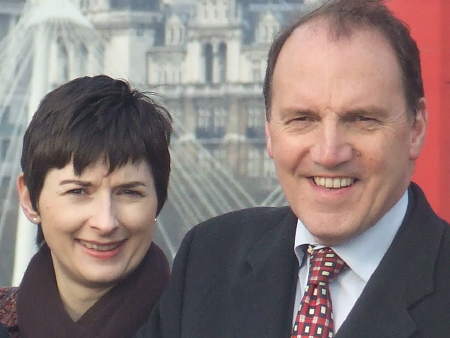 Caroline Pidgeon has been a member of Southwark Council since 1998. She is currently the executive member for children's services and education.

In 2004 she narrowly missed out on a seat at City Hall, but is near certain to be a member of the London Assembly at the end of this week. Not only is she the Liberal Democrat candidate in the Lambeth & Southwark constituency, but she occupies third place on the party's London-wide top-up list. The Lib Dems currently have five seats on the Assembly.

A year ago she was selected as her party's parliamentary candidate in the Vauxhall constituency where she is up against Labour incumbent Kate Hoey.

On the role of a London Assembly member

"I see the role of the local Assembly member as someone to really champion issues in Lambeth and Southwark," says Cllr Pidgeon.

"My plan would be to be a very effective Assembly member championing local issues from the need to have more and better public transport through to improved policing and saving our local police stations."

The London Assembly is a poorly understood institution and its members have come under criticism from many quarters – including from the current Mayor – for not performing their scrutiny role as effectively as they might.

"I think it's what the individuals make of it rather than the institution," argues Cllr Pidgeon.

"We've seen very effective Assembly members from my party in the past such as Lynne Featherstone who's gone on to be the MP for Hornsey and Wood Green; she used it very effectively to champion local causes and I would do the same.

"I would be a full time Assembly member. Obviously I'll still be a councillor in Southwark and I would plan to come off the executive and become a backbench councillor but I think that sits very nicely with the work of the Assembly which is generally daytime meetings.

On bridging the gap between town hall and City Hall

"As a local Assembly member you have a very specific role to work with local community groups, to work with local councils – with them, not against them – and to really bridge that gap with bodies such as Transport for London which – as I've said previously – I think is the most unaccountable public body going.

"The thing that's struck me ... is that the first four years of the mayoral term the Mayor and the London Assembly member attacked Lambeth and Southwark [councils] because they weren't run by Labour.

"The last four years suddenly Lambeth isn't attacked but Southwark is. It's so blatent, it's quite cheap and it brings all politicians into disrepute.

"My view is that if I'm an effective Assembly member I will work with people of all parties and none to get the best things for the residents of Lambeth and Southwark."

On the Elephant & Castle

"The Elephant & Castle is a classic example where the London Assembly member could really be doing something, working with the executive members and leader of Southwark Council to actually really bridge that gap, find out what it is that Transport for London want and help negotiate the agreement we need to be able to go ahead with that massive regeneration.

"We could start pointing the finger and saying that TfL and the mayor's office are really holding up huge regeneration that will really benefit the whole people of Southwark.

On the Cross River Tram

"We've had a Labour Mayor and Assembly member for eight years and they haven't delivered us the tram," she says.

"The Mayor spent millions of pounds consulting on the West London Tram where no-one actually wanted it. That' s now been shelved and all that money wasted.

"There's a real desire for the Cross River Tram and it's quite clear from the consultation last year that there is huge support for it.

"People are really concerned at how much council tax has gone up – particularly the GLA precept.

"We will try to make the GLA and its bodies far more efficient and try not to have that huge council tax rise – I think it's been an average of 14 per cent ever year since the GLA was created."

"The idea is that we would get rid of the western extension and keep the scheme as it is, but we would also look at people who commute into Greater London and look at imposing a change there as that sort of long-distance commute pollutes far more than those travelling centrally."

On SE1's arts and culture scene

Pidgeon clearly values the contribution made by the local, national and international arts institutions in the two boroughs.

"What I really like is that a number of them are working together in this Invest to Save bid and they're actually working to really get the local community using these wonderful arts and cultural institutions," she says.

"I think my role would be to work with the institutions in my constituency and champion their cause."

She adds: "As a councillor in Southwark we've done a huge amount for arts and culture. Southwark Playhouse is going to be moving to the Elephant & Castle – that's showing our commitment."

On parks and open spaces

You've got a huge wealth of parks and open spaces such as Jubilee Gardens and we do need to see them not only preserved but invested in and that's something that I would take strongly to both councils and to City Hall.

On the Olympic Games

"The Olympics are a great thing," says Pidgeon, but she is worried that cash is being diverted from other worthy causes to fund the 2012 games. Despite that, she says that at City Hall she would work with the two boroughs to ensure that residents see the benefits of the Cultural Olympiad.

"Southwark is committed to the Olympics and we are working with all these cultural organisations to put on a fantastic programme of some kind around that time."

On regeneration plans for Waterloo

"It's very easy to think of somewhere like Waterloo or even London Bridge as somewhere where commuters come in but actually it's the people who live around there who have got to benefit from any regeneration and it's really important for them to be involved right from the start.

"I think there may be some concerns around Waterloo that we've picked up from some residents and they need to be properly engaged.

"It's fine for the big businesses – they obviously have a role to play because they want better facilities for their staff but actually we've got to make sure it benefits local people as well."

On the need for affordable housing

We asked Cllr Pidgeon about the difficulty of balancing competing needs for affordable housing and other community facilities – as witnessed in the recent controversy over the Doon Street tower which was supported by incumbent Assembly member Val Shawcross.

"It's always a Balance but the community needs to be involved from the start so that they are fully bought in to it," she says.

She highlights Southwark's innovative new section 106 project bank scheme as a way of giving local residents a greater contribution to decisions about regeneration.

"Potters Fields will be very interesting as that develops to see what we are able to come up with there that meets the aspirations of the local community while still providing affordable housing and a development that's affordable in terms of the developer making a profit."

On crime and antisocial behaviour

"There probably isn't one person in the community who hasn't been affected by crime in one way or another.

"What I think is really important is that we make sure we've got the full complement of police that we need. In Lambeth I think we're down about 80 officers at the moment and in Southwark we've had a long-running campaign to try and get 1,000 police.

"I think that given the very nature of the riverfront and other issues we do need to make sure we've got the right number of police across our borough.

"Alongside that my view is that we do need to be investing in quality youth facilities – places for young people to go which are safe and fun.

"It's also about developing the role of safer neighbourhood teams – making sure they've got the confidence of the whole community – and in Southwark working with community wardens. I think they have a very good role to play in order to gather that intelligence.

On the 33 per cent turnout at the last election

Four years ago two thirds of the electors in Lambeth and Southwark didn't bother to vote in the London elections. Pidgeon is upbeat about the prospects of a better turnout this week.

"I think last time people thought it was a bit of a foregone conclusion that the current mayor would get back in.

"I think this time there really has been a huge debate in terms of the mayoral election and far more coverage than before.

"You've got a huge choice; you've got the existing mayor – and there's been all sorts of controversy around him and he seems very complacent in post.

"You've got a Tory candidate who everyone knows by his first name. A bit of a buffoon, a bit quirky but may well appeal to some people.

"And for us you've got a former senior Met police officer who brings with him huge amounts of experience and gravitas and would be able to do the job incredibly well.

"So I think that excites people – it's really a bit different.

"But also locally for the Assembly people do understand they've got three votes, they've got different ways of voting.

"Certainly the people I'm talking to – whatever they might be doing for Mayor – are thinking very seriously about voting for me as the local choice for Lambeth and Southwark."

• Caroline Pidgeon's website: www.carolinepidgeon.org
• Read our interviews with the Labour and Conservative candidates