The Fire Station bar in Waterloo Road is to have its licence reviewed by Lambeth Council as residents complain about customers blocking the pavement. 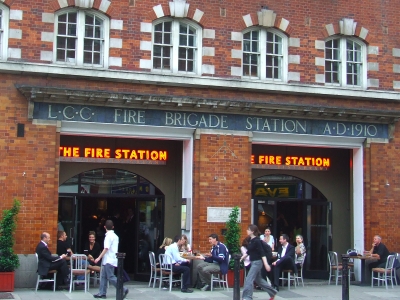 The application for review has been lodged by Waterloo resident Mike Tuppen following a meeting of the South Bank Forum last month.

"Residents feel that they are being treated as second class citizens," Mr Tuppen told the Forum which met at the Coin Street Neighbourhood Centre. "The increase in late and twenty-four hour licences has resulted in serious inconvenience with our pavements being blocked and noise. Residents are forced to walk in the road."

Later the Forum, chaired by Vauxhall MP Kate Hoey, was shown videos of street drinking. One film, said to have been shot at 11.30pm, showed a large noisy crowd outside the Young Vic.

Residents at the meeting complained about crowds on pavements outside the nearby Anchor & Hope, The King's Arms in Roupell Street and The White Hart in Cornwall Road. There were also allegations about large crowds drinking in Baylis Road in the early hours at weekends.

Dr Andy Parfitt, from the accident & emergency department at St Thomas' Hospital, said that since the change in licensing laws his colleagues were now seeing people brought as a result of alcohol misuse at 7am and 8am instead of just at around 11pm.

Mr Tuppen has submitted photographic evidence to back his claim that Fire Station customers blocking the pavement have "had the effect of endangering members of the public and causing a public nuisance".

A spokesperson for The Fire Station did not wish to comment.

The review application can be read here; Representations can be made to Lambeth's licensing department until 31 October. A date for the hearing some time in November expected to be announced shortly.