Go-ahead for Vinopolis' restaurant, shops and bakery at Borough Market

Southwark's planning committee this week backed plans by the owners of Vinopolis to create a new restaurant and shopping boulevard alongside derelict railway arches between Park Street and Stoney Street. 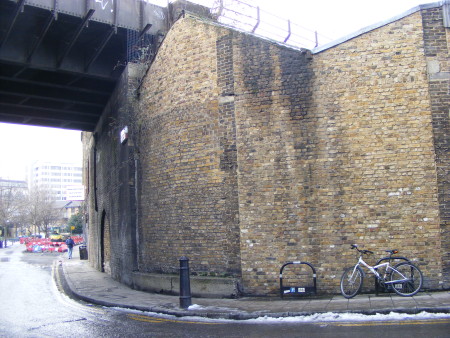 Wineworld London plc wants to open up a pedestrian walkway from Park Street to its existing Brew Wharf bar off Stoney Street. The development would include an 80-cover restaurant at the Park Street end and several retail units including a bakery next to Brew Wharf.

Southwark's head of design & conservation Michael Tsoukaris described the design, by local firm Greig & Stephenson, as "a modern reinterpretation of the character of the area".

The meeting heard from Park Street resident Mike Challenger who spoke on behalf of neighbours and as a member of the Cathedral Area Residents' Association.

"Residents are not opposed to change; we live in a redevelopment hotspot," he said. "But the area is being over-developed. It's not regeneration but degeneration."

"The area has become saturated with restaurants, bars, food outlets which serve takeaways. This current planning application, which is principally a restaurant, will – if permitted – destroy what residential amenity is left and drive more people away; especially young families.

"Park Street residents have had to put up with several hundred people standing outside The Market Porter pub. Visitors do not leave quietly. They shout; some are sick on the pavement; rubbish is dumped; people urinate on the street; refuse trucks stream in and out of the narrow streets emptying bottles at all hours of the day and night."

He warned that residents feel "under siege". Mr Challenger told the committee that there are already 15 restaurants within 100 yards of this proposal and he was seeking "a Balance that's good for everyone concerned".

Rupert Ellwood, managing director of Wineworld London plc, told the committee that his scheme is "a good example of a development that makes good use of a brownfield site".

Vinopolis says that the scheme will provide 55 new jobs, some of which will be recruited locally.

Mr Ellwood said that his firm has been consulting with local residents and planning officers since 2006 and had worked to address residents' concerns about noise.

He also pointed out that Borough Market is a night-time wholesale market so late-night noise is not a new feature of the neighbourhood.

"I was upset to hear The Market Porter mentioned in the same sentence as our restaurant," he said, explaining that the proposed 80-cover eatery would not create the same problems.

"We would not be wanting a Nando's-type operator with high volume," he said, citing Cantina Vinopolis, Roast and Black & Blue as better examples of the type of restaurant envisaged.

The committee heard that the proposed artisan bakery – which will supply Vinopolis's own restaurants and others in London – required 24-hour use to be viable, but it would not be "a huge bread factory".

Mr Ellwood explained that the retail units would "add value" to the market area. "We are looking for small local businesses and producers to complement what's in the market," he said.

Architect Ken Greig added that the proposed link between Park Street and Stoney Street would "improve the permeability of the area".

Cathedrals ward councillor Adele Morris addressed the committee with strongly-worded concerns about the changing character of the area and the impact of antisocial behaviour linked to the night-time economy on residents' lives.

"I do believe that we are losing that historic quality of the Borough Market by just putting in all these modern retail things," she said. "They are killing the very thing of beauty that is currently Borough Market."

She also voiced concerns about the ability of the borough's planning and licensing departments to adequately monitor the conditions imposed on developments with the intention of protecting residents.

Cllr Morris cited the example of the new Neal's Yard Remedies shop in Stoney Street which installed a new shopfront without planning permission. "This is where Borough Market is going: people do what they like, when they like," she said.

She warned that "the cumulative effect of the night-time restaurant and bar economy and the knock-on that has on local residents" is "a real issue".

Members of the planning committee voted 5 to 2 in favour of the development.