Drama on Tower Bridge as six injured in lift failure

Six people were injured in the north tower of Tower Bridge on Monday afternoon when a lift malfunctioned. 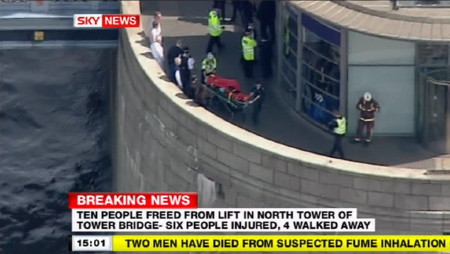 "Earlier today there was an incident involving a passenger lift on the north side of Tower Bridge and six people (two women and four men) were taken to the Royal London Hospital," said a spokesman for the City of London Corporation.

"One broken leg and one suspected broken ankle have so far been diagnosed. Ten people walked away uninjured."

City of London Police and the London Fire Brigade were called to the accident shortly after 1pm.

The London Ambulance Service sent two motorcycle response units, one single responder in a car, three ambulance crews, a duty officer and the hazardous area response team to the scene.

The lift has a capacity of 40 and takes visitors to the Tower Bridge Exhibition from the ticket office on the ground floor to the high level walkways which are 40 metres above road level.

The Health & Safety Executive is conducting an investigation.

The bridge was closed to road traffic while ambulance and fire crews dealt with the incident.

By 3pm the bridge had reopened to traffic but the Tower Bridge Exhibition remained closed to visitors.

Sky News had their Skycopter hovering over the scene for some time to provide live pictures.