The BBC Blast Studio is an interactive art installation in a railway arch at Hungerford Bridge that will allow young people (and the not-so-young) to create a piece of collaborative work in real-time over the internet. 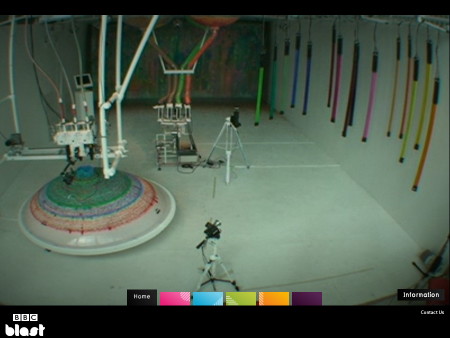 The Blast Studio installation is housed in the Topolski Studio in the railway arches at the southern end of Hungerford Bridge alongside the the Royal Festival Hall.

The Topolski Studio – formerly the workplace of the late Feliks Topolski – is the education space associated with the recently reopened Topolski Century attraction in nearby Concert Hall Approach.

The Blast Studio lets participants contribute to the installation by controlling machines remotely via the www.blastgetcreative.co.uk website.

The machines then create the installation in real time by firing paint against the walls, adding to a sculpture, creating a custom audio-visual sequence using hanging strip lights or using automatic typewriters.

The installation will be created organically over a four-week period; the interactive tools are available daily 12 noon till midnight until 9 June.

Although the site is aimed at 13 to 19-year-olds, anyone can take part.

The project aims to help teenagers explore their own creativity by experimenting with different artistic styles in an interactive environment.

The Blast Studio has been produced by the BBC as an experimental introduction to BBC Blast which promotes the development of creative skills in 13 to 19 year olds. The BBC Blast tour is coming to the South Bank on 12 and 13 June.