Proposals to turn the Topolski Century gallery on the South Bank into a cafe-bar have been approved by Lambeth Council's planning applications committee. 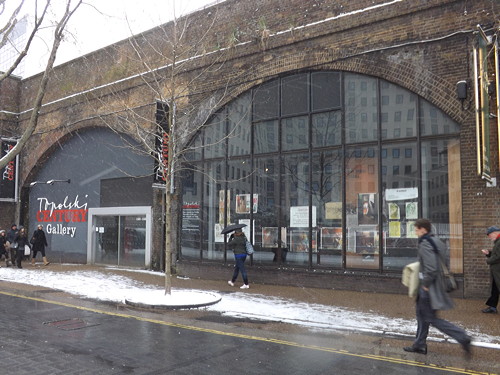 Between 1975 and 1989 Polish-born artist Feliks Topolski created a 15 ft high continuous 600 ft painting in railway arches on Concert Hall Approach recording the personalities and the social and political upheavals of the 20th century, from Mao's China to World War II and Elvis Presley to the Vietnam War.

Opened by the Duke of Edinburgh in 1984, the gallery was run down and in poor condition by the mid-2000s. A Ł3 million Lottery-backed refurbishment was completed in 2009. Mayor of London Boris Johnson performed the reopening ceremony and later that year Prince Philip came for a return visit.

But a year later the gallery closed to the public, hit by poor visitor numbers and rising Network Rail rent on the railway arches..

Over the past two years a variety of special events have been held in the gallery whilst options for its long-term future has been explored.

Proposals for the space to be transformed into the Topolski Cafe, a 204-seat eatery with sections of the memoir suspended from the ceiling, were last week approved by Lambeth's planning applications committee.

The cafe will be run by Company of Cooks whose existing Southbank Centre venues include Concrete at the Hayward Gallery and the Riverside Terrace Cafe at the Royal Festival Hall.

Daniel Topolski writes: "I should add that introducing a cafe to my father's Memoir painting under the arches of Hungerford Bridge  provides vital income, and thus security, for its ongoing presence on the South Bank;  and it will continue to be seen by potentially a much larger public. The Memoir story will remain in episodic form on the walls and ceilings of the cafe arches, a plan approved by the Heritage Lottery Fund, the Century's biggest backer.

"The panels not on display in the cafe will move five arches along towards the river where Feliks set up his studio 60 years ago, where they can be seen by appointment. They will also be taken on tour to regional museums as funds from the cafe operation permit as well as being rotated through the cafe itself.

"Also the active educational programme that has continued to run successfully since the Memoir opened 3 years ago will be maintained at the Studio arch under education officer Andrea Marie.

"With a fair wind the Topolski Memoir should survive the current economic struggles. Hope to see you at Topolski's in the summer."