The Duke of Edinburgh visited the Topolski Century on the South Bank on Thursday morning, 25 years after he opened Feliks Topolski's visual memoir of the 20th century. 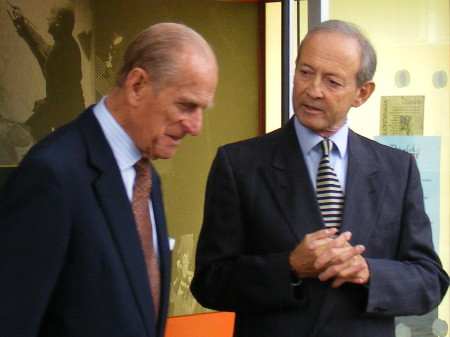 The Duke of Edinburgh with Daniel Topolski

The memoir is a 600 ft-long mural that snakes its way around three railway arches in Concert Hall Approach. It draws heavily on the artist's own first-hand experience of many of the key moments in 20th century history and politics.

Topolski Century reopened to the public earlier this year after a Ł3 million refurbishment.

The Duke, who in 1959 commissioned Feliks Topolski to create a mural depicting the Queen's coronation, has been a long-standing supporter of Topolski Century. Last year he hosted a tea party at Buckingham Palace as part of the fundraising drive to secure the artwork's future.

On Thursday he toured the restored exhibition and unveiled a plaque acknowledging the contributions of the principal sponsors.

In his speech the Duke said that the refurbished exhibition is a great improvement from the dark, damp railway arches he remembered from his visit a quarter of a century earlier.

"I'd like to congratulate all the people who were involved with it," he said. "It's terrific."

Prince Philip also recalled visiting Topolski at work in his studio which was in a nearby railway arch alongside the Royal Festival Hall.

Among the guests at Thursday's event were Wesley Kerr of the Heritage Lottery Fund and Revd Martin Dudley representing the City Bridge Trust.

The Duke's visit was hosted by the artist's son Daniel Topolski and Lord Razzall, chairman of the Topolski Memoir Appeal.

• Topolski Century is open daily; admission is free on Mondays