The Lord Mayor of London and a past Mayor of Southwark met on Blackfriars Railway Bridge on Tuesday to mark the start of major work on the creation of a cross-river station with a new entrance on Bankside. 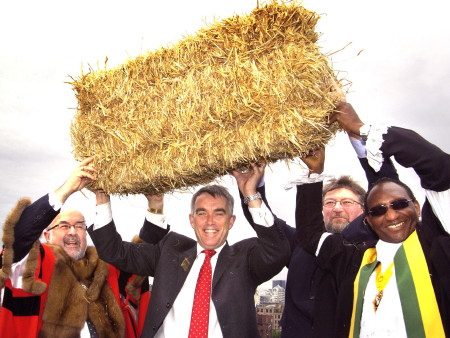 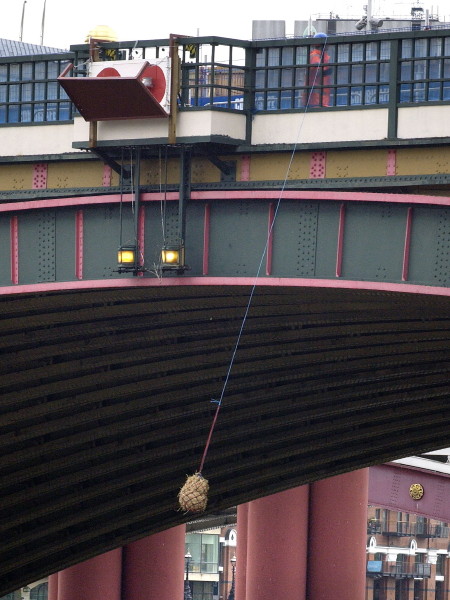 In a resurrection of an old Thames tradition a bundle of straw was hung from Blackfriars Railway Bridge to warn river users that work is taking place overhead.

The City of London was represented by Lord Mayor Ian Luder and Southwark by the borough's past mayor Cllr Columba Blango.

"Blackfriars is an exciting, complex and high profile project, and an important milestone in the Ł5.5 billion congestion-busting Thameslink Programme.

"The new station will provide better services for passengers, delivering more trains, more seats and help facilitate new direct journeys to and through the capital.

"We are confident that with its modern design, look and feel it will become instantly recognisable and much admired."

Preparatory work for the much-delayed Thameslink Programme (formerly Thameslink 2000) began last summer, but work is now beginning in earnest on the rebuilding of the station.

The riverside path under the southern end of Blackfriars Railway Bridge will be closed for an extended period whilst the new station entrance is created on Bankside. Pedestrians will be diverted via Hopton Street.

The pavement at the north-eastern side of Blackfriars Bridge has also been closed whilst work is carried out.

"This fantastic new station – the first-ever to span the Thames – will be able to accommodate the new-generation of crowd-busting 12-carriage trains we'll be running on the Bedford to Brighton Thameslink route as they are introduced between 2012 and 2015," says First Capital Connect managing director Jim Morgan.

The new Blackfriars station is due to be completed in 2012.