If councillors approve the redevelopment plans this week, the Elephant & Castle Shopping Centre could close its doors in March 2019, marking the start of a building project lasting up to a decade. 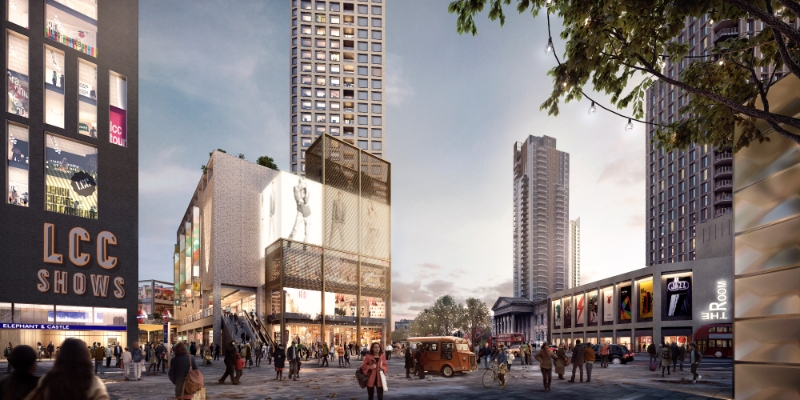 More than a year and a half after the planning application was submitted – and nearly six months since it was first presented to councillors at a planning committee meeting – a final decision is expected on Tuesday night on Delancey's plans for nearly 1,000 new homes on the sites currently occupied by the Elephant & Castle Shopping Centre and the London College of Communication – as well as new shops, a cinema and a new building for the college.

Although this is likely not the final twist or turn in the history of the shopping centre – which has defied many attempts at redevelopment over several decades – no previous scheme has got as far as this one.

Already the first major tenant has announced its closure date – Santander bank will leave the Elephant in September this year – but the centre as a whole is likely to close in spring next year.

The recent controversy over the redevelopment has focussed on three areas: affordable housing, the future of the bingo hall and assistance for the centre's small traders – many from ethnic minorities.

In January the 979-home development included just 33 homes at the equivalent of social rent levels. Now, with City Hall funding in prospect, 116 homes in the scheme are proposed to be built social rented homes, likely to be owned and managed by the council rather than the developer.

However, these council homes will be among the last parts of the scheme to be built, as they will be on the London College of Communication site which can't be demolished until the new university building is ready on the New Kent Road side.

There's also no change to the overall provision of affordable housing; the increase in social rented housing has largely been achieved by reducing the number of homes to be offered at London Living Rent, a tenure pegged to local income levels.

Delancey has also struck a deal – the details of which have not been disclosed – with Palatial Leisure, the owners of the bingo and bowling venue above the shopping centre, that will see them close their doors five years ahead of the 2024 end of their lease.

The company is understood to be looking for temporary premises in the area and will be offered the opportunity to lease space for a 1,000-seater bingo hall within the new development.

And although campaigners argue that the measures don't go far enough, Delancey has made extra provision for some of the existing businesses, with the offer of some temporary trading space in Castle Square, opposite the railway station entrance on Elephant Road.

Other new commitments include a 'trader relocation panel' with an independent chair.

Stafford Lancaster insists that it is in Delancey's interests to ensure existing Elephant businesses have a place in the redeveloped site.

"l I think one of the challenges we've had – and still have – is people believing that we really like quite a lot of the Elephant," he told the SE1 website.

"Obviously the Elephant has got a rich history – but it's also got a rich recent history – and there's some great things as a result of that."

He added: "I think the essence of success here is that ecosystem working still.

"It's not going to work if we just land a load multiple retailers onto a high street. It just won't work and it will fail.

"It's not as if we're just saying it as a sop to people; it's actually because we're trying to create – in a good business sense – the right environment that will thrive.

"Retail doesn't thrive anymore unless you are more creative. I think that's the truth of it."

Although public and political concern has centred on the small businesses at the Elephant, the centre also hosts larger firms who play an important role in the community infrastructure of the neighbourhood, including two supermarkets, two pharmacies and several banks.

Lancaster says that Delancey has deliberate delayed the leasing of the retail space it owns around the Sainsbury's store on New Kent Road to help with business continuity when the centre shuts.

"Notice it's empty. We're not doing that for fun. We're doing that because that's one area we do control.

"If we get the certainty [of planning permission] we can then move forward with a programme to orchestrate some moves."

Delancey has often cited the East Village development as a precedent for the shopping centre and LCC site, but it has less often talked about what it has learnt from the build-to-rent housing it already runs on New Kent Road and Elephant Road at the development variously known as Elephant One and Elephant Central.

"I think Elephant One is going very well. We've only really launched it in the past six months and it's filling well. There's a huge demand for it."

He says that the local competition with Uncle's build-to-rent housing next to St Mary's Churchyard at Newington Butts – and with Lendlease who announced earlier this year that some of the new homes on the Heygate Estate site will be offered on long-term rental rather than sold – is "a good thing".

Prices for the Elephant Central flats have dropped a bit since they were first marketed last summer – the cheapest flats are now £375 a week as opposed to £410 – but Delancey claims this doesn't mean that demand is weaker than hoped.

"The thing about rental housing is that the market's so opaque because a lot of it's controlled by estate agents and​ individual private landlords.

"You never quite know – and we are always adjusting the price of our rental properties because that's the dynamic of the market.

"That is just the nature of it and we've been we've been learning our trade in that for the past five years at East Village and what's clear to us is there's there is huge demand in Elephant for good quality homes that are professionally and well run."

• Southwark's planning committee will decide on the Elephant & Castle scheme on Tuesday 3 July from 6.30pm. Critics of the scheme will hold a protest outside the meeting at the council's Tooley Street HQ from 5.30pm. The meeting itself is due to be live-streamed on the council's YouTube channel and there will be commentary and analysis on our Twitter feed @SE1 as the meeting progresses.