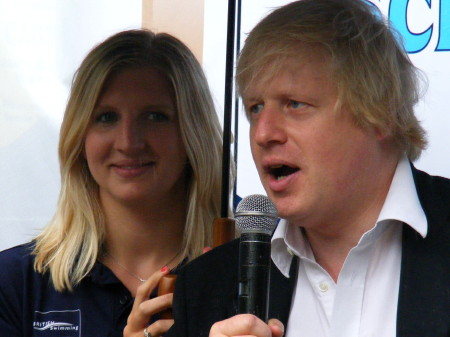 Rebecca Adlington and Boris Johnson at the launch of the pool 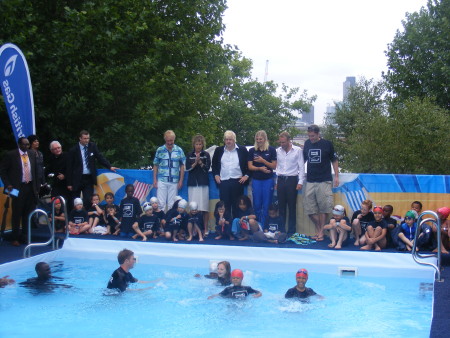 The British Gas Pools 4 Schools Summer Camp has brought a mobile 12-metre pool to the grass outside the London Television Centre on the South Bank.

Boris Johnson paid tribute to his sports commissioner Kate Hoey, who is also Vauxhall's Labour MP, for her role in bringing the pool to the South Bank.

"Swimming is the most wonderful form of exercise you can think of," says the Mayor. "I did it in a river in Catford recently. You don't need any particular strength or skill. Kids across London can learn the love of sport by doing it.

"It's an ideal thing for a rainy English August; unless you're doing something seriously wrong when you go swimming, you're going to get wet anyway."

The pool is part of Coin Street Community Builders' summer programme of activities for local residents.

In his speech Coin Street Community Builders director Iain Tuckett recalled his organisation's previous plan for a floating lido on the Thames and expressed a hope that the Mayor would be able to return to the South Bank in five years' time to open the new leisure centre on the Doon Street car park site.

The leisure centre and swimming pool is part of the controversial Doon Street tower development which is currently the subject of a High Court challenge by Westminster City Council, English Heritage and some local residents.

The temporary pool is run by social enterprise GLL who are also the prospective operators of the Doon Street leisure centre.

Mr Tuckett also pointed to the recent Ipsos MORI opinion poll of local residents which highlighted the widespread local dissatisfaction with the lack of swimming facilities in the area.

• Full details of Coin Street's summer programme can be found at www.coinstreet.org

• This year's South Bank pool follows the success of the temporary Southwark Lido which was set up in Union Street last summer as part of the London Festival of Architecture. A new book about the Southwark Lido is now available from the Architecture Foundation.