The two-year closure of the Thames Path on the southern side of Blackfriars Bridge is now less than three weeks away. 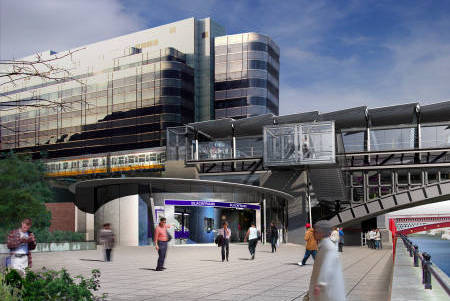 A new entrance to Blackfriars Station will be created on Bankside

The closure of the section of the Thames Path linking the South Bank and Bankside via Blackfriars Railway Bridge is to allow the creation of a new entrance to Blackfriars Station which is being extended across the Thames as part of Network Rail's Thameslink programme.

The new station entrance feature a new glazed ticket hall with shops and access to the new platforms.

"The creation of a new station entrance on the South Bank will not only make journeys easier for thousands of commuters who use Blackfriars every day, it will also provide easier access for visitors to some of London's leading attractions, such as the Tate Modern and the Globe Theatre," says Jim Crawford, Network Rail's Thameslink major programme director. "In the long term, we have no doubt the new station will bring many benefits to this area."

A 100-metre section of the Thames Path between the south-eastern end of Blackfriars Bridge and the Founders Arms will close during the week beginning 14 September (just after The Mayor's Thames Festival) until late 2011.

Pedestrians out for a stroll along the river will be diverted via Blackfriars Road, Southwark Street and Hopton Street.

Network Rail says that if safety concerns can be addressed it will seek to open up a more direct pedestrian route during peak periods.

For people with reduced mobility or pushing prams a step-free route is also available via Marigold Alley.