Southwark councillors have urged Charles Dickens Primary School to come up with proposals to reopen Lant Street outside school hours. 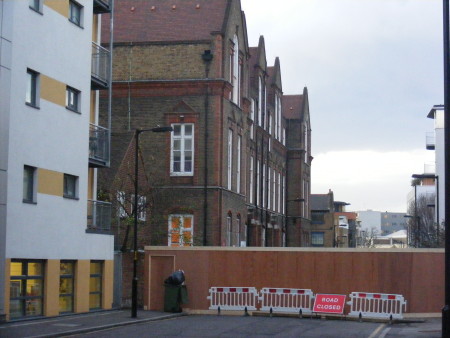 Lant Street pictured in January when the closure was first introduced

Permission for new boundary fencing and other changes to the former public highway was reluctantly granted by councillors at a Borough & Bankside Community Council meeting held in the Ability Media Centre in Southwark Bridge Road on Thursday evening.

AOC Architecture's design for the scheme was featured in this year's Summer Exhibition at the Royal Academy of Arts.

The planning application was previously discussed at a heated meeting of the Community Council in July but was deferred for final decision this month, scuppering the school's plan to carry out the works during the summer holidays.

The section of Lant Street outside the school building has been closed since the start of the year to allow for further play space for pupils.

However, many residents who support the school expansion are unhappy at now being unable to walk the length of the street.

"A very large and important area of land is now fenced off to be used only during school hours," complained Michael Finnerty, assistant secretary of the Lant & Bittern Streets TRA.

He added that the community will be shut out after school, every weekend, holiday and summer when the school is closed. He also warned that government budget cuts could result in the scheme remaining unfinished.

Giving evidence, Cllr Adele Morris drew members attention to the original plan produced in 2002 in co-operation with BOST. This allowed for pedestrian access as well as a community garden.

"This is what residents believed they were getting," said Cllr Morris. "What happened along the way?"

After questioning pupil statistics, which she claimed were in one instance conflicting, Cllr Morris said that prior to closure there were 1700 pedestrian movements a day along Lant Street.

"That sounds quite a lot to me."

A legal officer advised councillors that a wish for public access to be restored could not be a consideration as permission for closure had already been granted at another meeting.

This council decision had also been acknowledged by the Mayor of London. His deputy Ian Clement, who recently resigned following allegations of fraud, was responsible for planning matters and he concluded last year that "in the special circumstances of the case" it was unnecessary to hold a public inquiry.

From the chair, Cllr Mackie Sheik called for such a discussion to take place. Cllr Lorraine Zuleta warned that for the sake of good community relations in coming years there should be a scheme which had the support of residents.