John Prescott has launched his UK tour of schools by delivering a presentation on climate change at a Southwark school. 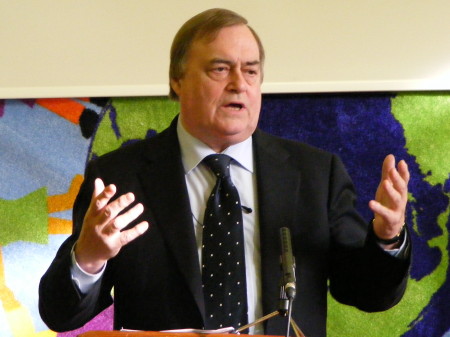 The former Deputy Prime Minister, who chose the Globe Academy for his first talk, was speaking in his new role as Rapporteur on Climate Change for the Parliamentary Assembly of the Council of Europe.

The tour is iintended to raise awareness before the UN Climate Change Conference in Copenhagen in December.

Having negotiated the Kyoto Protocol as a minister, Mr Prescott is backing the Council of Europe's call for the right to 'live in a healthy and viable environment' to be enshrined in the European Convention of Human Rights.

"In 1949, the Council of Europe drew up the European Convention of Human Rights to ensure that we never again had to endure a global war.

"60 years on, the global threat isn't from war but from climate change.

"That's why we propose drafting a new Protocol to the Convention, enshrining the right to a healthy and viable environment as a fundamental human right."

During the visit the school students were shown a preview of Al Gore's message to be shown at next week's PACE 'Road to Copenhagen' Climate Change Conference in Strasbourg.

Mr Prescott added: "We believe that any deal must consider the principle of common but differentiated responsibilities and respective capabilities.

"That means that social justice and the reduction of poverty must be at the very heart of any agreement. It also means equalising greenhouse gas emissions per head in each country.

"The climate change we're experiencing across the world has been caused by the richer developed countries so they must now recognise the central principle that the polluter pays."

A special guest at the launch was windfarm developer and environmental activist Piers Guy who stars in the the environmental movie Age of Stupid.

Age of Stupid director Franny Armstrong – who earlier this month launched 10:10 at Bankside – has said: "Everyone at Team Stupid is delighted to join forces with John Prescott as he heads in to schools up and down the country."

At the Globe Academy the former cabinet minister – whose London home is in SE1 – was introduced to the year 7 audience by English teacher Prean Naidoo. Over the next three days Mr Prescott will be speaking at schools in Leeds, Manchester and Birmingham.

• Next month Archbishop of Canterbury Rowan Williams will be setting a scriptural and theological agenda for the UN climate summit in Copenhagen when he gives a free public lecture at Southwark Cathedral.