Southwark Council's cabinet this week agreed to enter a joint venture with Berkeley Homes for the redevelopment of the Potters Fields coach park site near Tower Bridge. 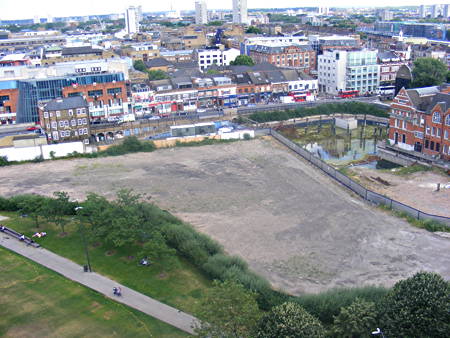 For the past two years – and following a protracted dispute – Southwark Council and Berkeley Homes have been working under a cooperation agreement to come up with a new development for the vacant land between Potters Fields Park and Tower Bridge Road.

The council had vehemently opposed Berkeley Homes' original Ian Ritchie-designed scheme for the site. Its eight cylindrical towers were nicknamed the 'Daleks' and won planning permission from John Prescott in 2006.

Berkeley Homes was unable to build the scheme in full because a large portion of the land is owned by the council.

On Monday morning Southwark's cabinet agreed to sell its section of the land to the One Tower Bridge Partnership, a 50/50 partnership between the council and Berkeley Homes.

"This will bring forward this site which has remained vacant and derelict for many years for development providing new homes, commercial and retail opportunities and cultural accommodation," said Cllr Fiona Colley, cabinet member for regeneration.

"In addition, significant capital will be generated to assist the council in meeting its core objectives through the capital programme for the benefit of all residents in Southwark. This will form an important funding stream in this uncertain economic climate."

In May Berkeley Homes staged a public exhibition of its latest proposals designed by Squire and Partners. 356 homes for market sale are planned, with 46 'affordable' homes to be provided on a separate parcel of land – owned by the City of London Corporation – facing Tower Bridge Road.

The development also includes a 'cultural' space which could be used as a performance space or gallery.

A planning application has recently been submitted to Southwark Council and is currently being validated by planning officers before the public consultation period begins.

The scheme involves changes to the boundary of Potters Fields Park. A land swap is envisaged, with a portion of the coach park land being returned to the park in exchange for a strip of park which will be developed.

Because the development encroaches onto metropolitan open land, the secretary of state's consent will be required for the boundary change.

Earlier this year Museum of London archaeologists carried out a dig on the coach park site. A report published on the Mayor of London's website revealed that Bronze Age artifacts were found.

Do you welcome the latest deal between the council and Berkeley Homes?