Berkeley Homes and Southwark Council will unveil their new plans for the derelict coach park at Potters Fields at a public exhibition this month. 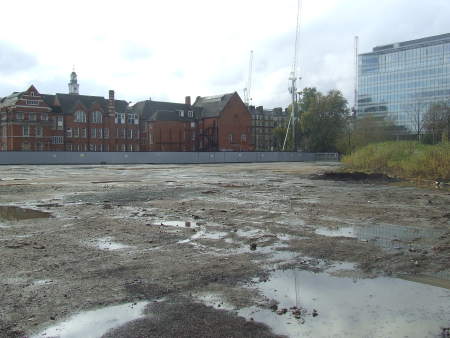 The prime site next to Tower Bridge and opposite the Tower of London has been a source of great controversy for many years.

A large chunk of the land is owned by Southwark Council which opposed the Berkeley scheme.

After a long-running feud about the future of the site, the two landowners signed an agreement in April to work together to devise new proposals for a housing-led development incorporating a space for an as-yet unspecified cultural use.

Berkeley Homes then commissioned Squire & Partners to design a new scheme which will soon be made public.

The London SE1 website has learnt that the new development:
• includes 8 buildings ranging in height from 6 to 11 storeys
• features an illuminated 'campanile' roughly the same height as Tower Bridge.
• incorporates a pedestrian avenue linking the Samuel Bevington statue in Tooley Street with Tower Bridge
• involves demolition of the recently completed Blossom Square Amano kiosk
• would encroach on land currently part of Potters Fields Park but would 'give back' more land

"We are delighted that we have reached the stage where we can share these exciting plans with the public," says council leader Nick Stanton.

"We have been through a thorough process of consultation and have listened to a range of opinions from interested local community and business groups.

"We have taken their views on board and we are confident that people will be pleased with the results.

"Berkeley Homes and Southwark Council are committed to delivering an exciting, world-class design that fits this unique site – and we believe these plans achieve just that.

"We are very keen to hear what local residents think about this scheme and this will helps us make final amendments to the plans before they are submitted."

Berkeley Homes says that the selection of a user for the cultural space is now under way and a short-list of four has been drawn up by the developer.

The public exhibition of the new plans will be held at the Former St Olave's Grammar School on Tooley Street from Wednesday 10 to Friday 12 December. The display will be open 2pm to 8pm.