Petition launched against ‘gory scenes’ in the street at London Bridge

A petition calling for an end to the on-street promotional activities of the London Bridge Experience and London Dungeon by London Bridge Station has been launched by local parents. 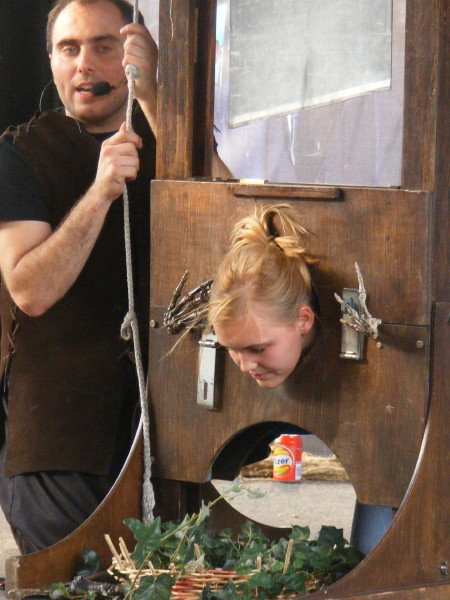 A mock execution outside the London Bridge Experience in September

The London Bridge Experience was opened in early 2008 by Bermondsey-born brothers Lee and Danny Scriven. Along with the London Dungeon, its costumed staff compete for the attention of tourists arriving at London Bridge Station with a guillotine mounted on a stage at the bottom of Duke Street Hill.

"The London Bridge Experience and the London Dungeon are displaying inappropriate sights, sounds and activities outside their respective premises in Tooley Street," says the text of the petition. "Many local children are terrified of going near the area.

"People visiting local hospitals are disturbed by the gory scenes enacted outside The London Bridge Experience.

"We request Southwark Council to take rapid action to ensure that both organisations confine their activities to the interiors of their premises and restrict their promotional material to silent signage that is purely typographical, without any attached photography or other visuals."

Lambeth & Southwark's London Assembly member Val Shawcross met the management of The London Bridge Experience after she received a complaint from a Bromley resident who said that their young children were "scared witless" by the gruesome displays on Duke Street Hill.

"I have been left dealing with their nightmares," wrote the complainant. "My son is having nightmares asking if the bad people are coming for him and will mummy and daddy be able to protect him."

Ms Shawcross says that the Experience's management have taken on board the concerns and "agreed to keep their performances moderate, unrealistic and theatrical in style" and to avoid approaching families with small children.

"Since that meeting I have not had any more complaints," she says. "I walk past the venue almost daily and so far they have kept their word."

The London SE1 website has also received emails this summer from local residents young and old complaining about noise nuisance and disturbance from the promotional activity.

In September a paper petition was circulated amongst parents at Cathedral School and now an online petition has been set up.

At the time of writing the petition had received 43 responses. Signatories include Canon Andrew Nunn, sub dean of Southwark Cathedral, who writes: "The glorification of horror and the concept of suffering as entertainment make these places a scandal.

"If people choose to pay money to be 'entertained' in this way that is up to them. But those of us with more taste or different moral and ethical standards should not have to be confronted with it.

"I am particularly concerned for those coming to Southwark Cathedral through the underpass from Tooley Street to Montague Close where this is becoming a particular problem."

Southwark Council is currently considering two planning applications for a new Tudor shopfront-style facade for the London Bridge Experience's entrance below the southern end of London Bridge. The current painted panels of old London Bridge do not have planning permission.

• We invited the London Bridge Experience to respond to the petition but they declined to comment.