"War of words" over Jubilee line closures must end

Labour and Lib Dem members of the London Assembly have called for sensible negotiations on Jubilee line weekend closures amid a media row between contractors Tube Lines and Transport for London. 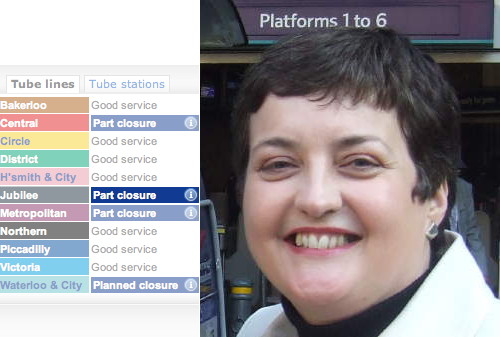 Mayor of London Boris Johnson has written to Tube Lines, the public-private partnership (PPP) contractor responsible for the Jubilee line, to seek answers after media reports suggested that a further 28 weekend closures could be needed in 2010 to complete an upgrade to the line's signalling system.

Transport for London says that the upgrade will enable them to run a train every two minutes at peak times on the Jubilee line, providing a third more capacity over and above the 17 per cent increase that was achieved through the addition of a seventh carriage to each train at the beginning of 2006.

Work on the upgrade project started in early 2007 and has involved dozens of weekend shut-downs on the Jubilee line.

"There has clearly been some kind of breakdown in communications between the two parties, as I met with Tube Lines today and they have told me that they have only requested six more full weekend closures, and even if that increases to accommodate things like training time, it should be no more than ten," says Val Shawcross AM, who represents Lambeth and Southwark on the London Assembly.

"The figure of 28 weekends, it seems, is being bandied around by TfL without any recourse to Tube Lines themselves."

She added: "It's time to stop talking and start doing and the Mayor and TfL need to bite the bullet and just get on with it – the sooner it starts, the sooner we can enjoy an improved London Underground – but unfortunately there's no gain without a bit of pain."

"Rather than a war of words in the press everyone needs to sit down together to work out a sensible programme so that passengers know what to realistically expect.

"The Jubilee line is an important service for my constituents in the Bermondsey, Rotherhithe and Canada Water areas, and they are already fed up and want to know what's really going on."

Lib Dem London Assembly member Caroline Pidgeon, who chairs the transport committee at City Hall, said: "The Mayor now needs to call a Tube summit, get all the players round the table, and bang heads together. This must include the owners of Tube Lines, Bechtel and Ferrovial, who pull Tube Lines' strings. These parent companies need to understand a better way of working has to be found. These delays cannot go on indefinitely."

Transport for London has refused to provide a replacement bus service for the Jubilee line west of London Bridge because it claims there is insufficient space at Waterloo for buses to turn round.

In August Simon Hughes MP wrote to Transport for London commissioner Peter Hendy to pass on constituents' complaints about the Jubilee line engineering works. He called for season ticket holders to be offered extensions or refunds to reflect the lack of seven-day service on the line.

He also complained about the "insufficient" replacement bus services, suggesting that route 381 should run to a weekday timetable whenever the Jubilee line is closed at weekends.

In October TfL's managing director for surface transport David Brown wrote to the MP saying: "I do appreciate that line closures cause significant inconvenience to our customers, and we would not agree to these closures if we thought Tube Lines could deliver the upgrade without them.

"It must be emphasised that this work is critical – without it, not only will the benefits of the upgrade not be realised, but the service will start to deteriorate over time."