The Dali Universe attraction at County Hall on the South Bank has closed its doors to the public. 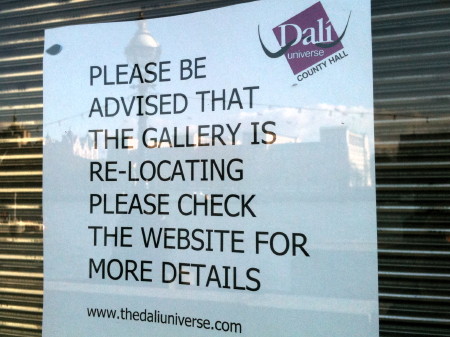 The Salvador Dali-themed attraction opened nearly a decade ago at the former home of London's government.

It is thought that Dali Universe closed last month. A notice on the doors says: "Please be advised that the gallery is relocating".

The notice advises visitors to check thedaliuniverse.com for updates, but the website is offline.

We tried to contact Dali Universe by telephone; both published numbers were unobtainable.

The attraction featured more than 600 works of art, including the huge painting created by Dali for Alfred Hitchcock's Spellbound.

The reproduction Dali sculptures which formerly adorned the riverside walkway outside County Hall have been removed.

Nasser Azam's sculpture The Dance, unveiled in 2008, has found a new home outside the nearby Park Plaza Westminster Bridge hotel. It was installed in its new location on Wednesday.