Retiring Bishop of Southwark Tom Butler received a standing ovation from the congregation at a farewell service at Southwark Cathedral on Sunday morning. 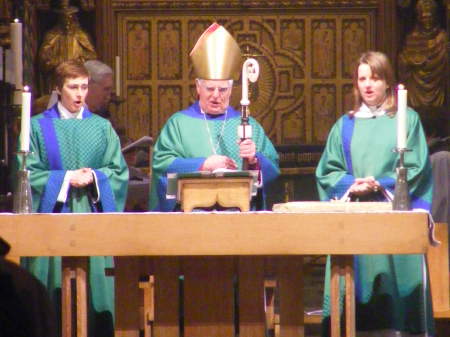 The Rt Revd Dr Tom Butler, Anglican Bishop of Southwark since 1998, will retire at the beginning of March when he reaches his 70th birthday.

This week he presided and preached at the Sunday morning Choral Eucharist at Southwark Cathedral for the last time.

The Eucharist was attended by the Mayor of Southwark Cllr Jeff Hook and North Southwark and Bermondsey MP Simon Hughes as well as representatives from Southwark's twin cathedrals in Bergen, Norway and Rouen, France.

"As well as being the mother church of the diocese, this holy place is home – week in, week out – to its own congregation of faithful people and it is with you that I wanted to spend my last Sunday here," said the Bishop as he began his sermon. "And it is very appropriate that today is St Valentine's Day – for I love this place."

At the end of the service the Dean of Southwark the Very Revd Colin Slee presented the bishop and his wife Barbara with an original painting of the cathedral.

The Dean praised the Bishop for his consistent support and prayer for the cathedral, particularly during the controversy in 2003 over the appointment of Canon Jeffrey John as Bishop of Reading.

The Bishop received a standing ovation from the cathedral congregation before giving the blessing.

The cathedral's Great Choir – with the combined voices of the men's, boys' and girls' choirs – sang at the service.

A diocesan service of farewell to Dr Butler will be held in the cathedral next Saturday, with a congregation drawn from across South London and Surrey.

This week the Archbishop of Canterbury Dr Rowan Williams paid tribute to the Bishop of Southwark at General Synod, describing him as "candid, faithful, creative" [MP3].

Dr Butler's retirement means that both the position of Anglican Bishop of Southwark and the post of Roman Catholic Archbishop of Southwark will be vacant, following the resignation of the Most Revd Kevin McDonald at the end of last year.

The process of appointing a new Bishop of Southwark has already begun. Last month the Archbishop of Canterbury's and the Prime Minister's secretaries for appointments held a public meeting at St John's Waterloo for members of Southwark diocese to air their views on the qualities and skills desirable in the next bishop.

Dr Butler, who will move to Yorkshire, will continue to broadcast regularly on Radio 4's Thought for the Day.