The Archbishop of Canterbury Rowan Williams was at Southwark Cathedral on Wednesday for the consecration of Archdeacon of Southwark Michael Ipgrave as a bishop. 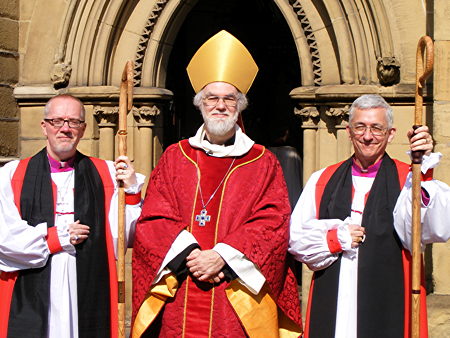 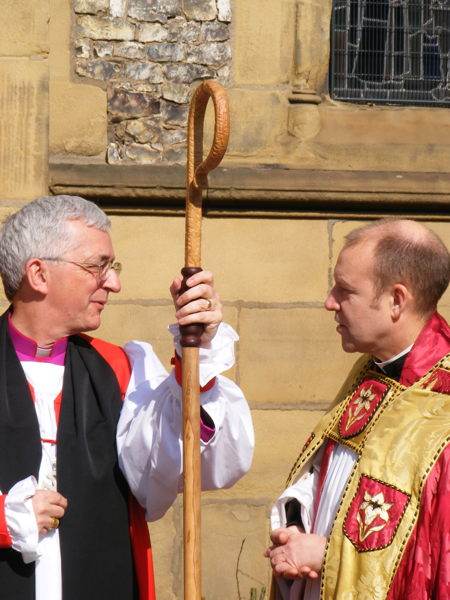 The Rt Revd Michael Ipgrave, new Bishop of Woolwich, with the Dean of Southwark, the Very Revd Andrew Nunn

The service attracted a full congregation for the consecration of Jonathan Clark, Rector of St Mary's Stoke Newington who is to be Bishop of Croydon, and Michael Ipgrave who is the new Bishop of Woolwich.

The principal consecrators were the Archbishop of Canterbury and the Bishops of London and Rochester. Also laying hands on the two candidates were 33 other bishops including Bishop of Southwark Christopher Chessun, his predecessor Tom Butler, former Dean of St Paul's Graeme Knowles, the Bishop of Yokohama and the Bishop of Glasgow & Galloway.

In his sermon, Dean of Southwark Andrew Nunn described the Croydon and Woolwich areas as "modern and demanding places of huge diversity, places where life is both privileged and comfortable, hard and demanding and where those living on opposite sides of the same street can be having a vastly different experience of life".

The Archbishop opened the service by announcing that Coptic Bishop Angaelos was unable to be present as he was still in Cairo following Tuesday's funeral of Pope Shenouda.

"They are asked to bear the same witness," said Rowan Williams who asked the congregation to pray for Egyptian Christians.