Canon Andrew Nunn is to be the next Dean of Southwark, it was announced on Sunday morning. 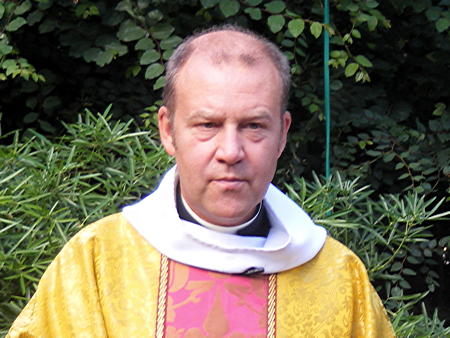 Canon Andrew Nunn, 54, has been at Southwark Cathedral since 1999

The congregation cheered and applauded when the news was announced at the end of the Sunday morning services.

He succeeds the Very Revd Colin Slee who died nearly a year ago. Canon Nunn is currently the acting dean.

"I am delighted to appoint Canon Andrew Nunn as the next Dean of Southwark," said Rt Revd Christopher Chessun, Bishop of Southwark.

"He is a gifted and wise pastor who has led the cathedral during a very challenging year with grace and compassion. He has a strong vision for the future of the cathedral and its engagement with the parish within which it stands and in developing its role as mother church in the wider diocese. He knows the diocese well having served within it for over 15 years.

"I look forward to welcoming him to his new role and to working with him as he becomes part of the bishop's staff team."

Canon Andrew Nunn said: "I am humbled and excited by the challenge of being dean of this vibrant and busy place, where it has been a privilege to serve.

"I look forward to working with my colleagues as we seek to draw closer to the other parishes in the diocese and to help to lead the diocese in its mission and ministry.

"Southwark Cathedral is proud of its tradition of welcome for all and I look forward to helping to ensure that it stands as a beacon of love and hope for people in the parish and the diocese."

It is unusual for a new dean to be appointed from amongst the existing staff of a cathedral. The appointment panel was chaired by Jennie Page, former chief executive of the Millennium Dome.

Canon Nunn joined the cathedral staff in March 1999. Initially his title was vice-provost and after a year he became sub-dean as part of a national reform of cathedral clergy titles.

He had arrived in London in 1995 as chaplain to the Bishop of Southwark, serving first under Roy Williamson and then Tom Butler. Prior to that he served as a parish priest in Leeds.

Canon Andrew Nunn will be installed as Dean of Southwark during Choral Evensong at 4pm on Saturday 21 January 2012.