Cllr Adele Morris and Cllr David Noakes were joined by none other than 'Charles Dickens' yesterday to unveil a new wrought iron gate and playground equipment in Little Dorrit Park in Borough. 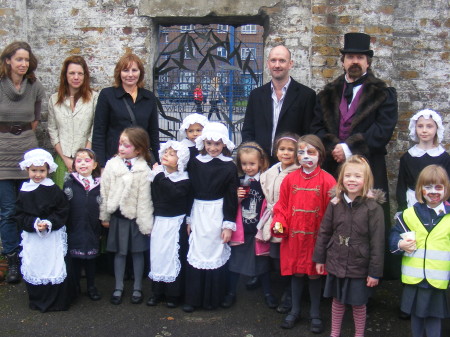 The two Liberal Democrat councillors for Cathedrals ward were there to celebrate recent improvements made to the playground following consultation with children and parents from neighbouring St Joseph's Catholic Primary School.

Cllr Morris said she first got involved in improving the park about ten years ago when her children attended a nearby school.

"When my children started school here there were grotty old bits of equipment and a stagnant pond," she said. "It is fantastic to see how the park has evolved and grown since then."

Together with pupils from nearby Charles Dickens Primary School, the children had fun trying out the new equipment and learning a bit of history from Mr Dickens himself, whose novel gave the park its name.

Little Dorrit is based on Dickens' childhood memories of his father's time in Marshalsea debtors' prison which closed in 1842. All that remains of the prison's southern boundary is a wall with two original gate arches in Angel Place next to John Harvard Library.

To commemorate the novel, the children worked with metal sculptor Heather Burrell to design the gate which is set into the original wall at the back of the park.

BOST director Helen Firminger said: "The kids chose the equipment in consultation with their parents, who also wanted more benches. Since a lot of local children live in flats and don't have access to a garden, in summer there's 100 kids in the park at 3.30pm so it needs to sustain a lot of people."