Bankside Open Spaces Trust has received an 'Outstanding' award as part of the Royal Horticultural Society's It's Your Neighbourhood scheme. 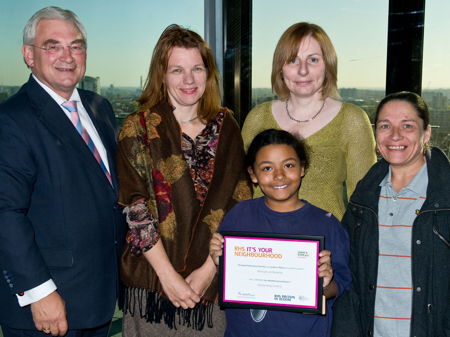 Representatives of the 10-year-old local charity received the award at City Hall on Monday during a ceremony hosted by Deputy Mayor of London Richard Barnes AM.

The RHS It's Your Neighbourhood scheme has five levels of achievement: Establishing, Improving, Developing, Thriving and Outstanding.

Community participation accounts for 40 per cent of the final score whilst environmental responsibility and gardening achievement are each worth 30 per cent.

"This is a fitting accolade to the hard work of many local people in planting and improving our neighbourhood," says Bankside Open Spaces Trust director Helen Firminger.

She was joined at the City Hall awards ceremony by Brooke Blades and Denise Withers from Brookwood Triangle and Cllr Adele Morris who has a particular association with Little Dorrit Park.