Network Rail says that it will take more than 2,000 lorry journeys off central London streets over the next two years by using Thames barges to deliver and remove materials from the Blackfriars station site. 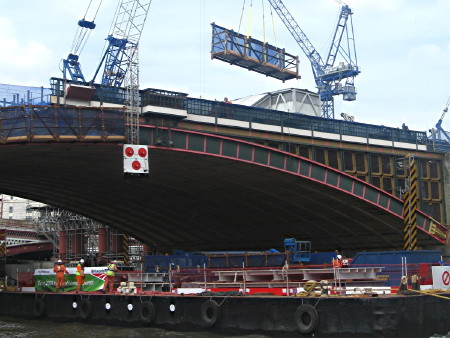 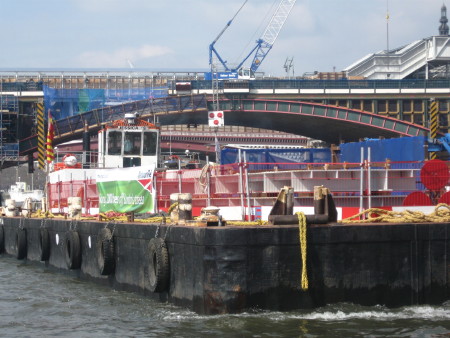 The barge operation began as a trial in late January and was developed in consultation with the Port of London Authority, Livett's Launches and Balfour Beatty.

Now Network Rail has set out its plans to use the river as a key part of its work to create a new station at Blackfriars with an entrance on Bankside as well as the north bank.

During the Blackfriars project Network Rail will deliver more than 14,000 tonnes of materials to build the station's new bridge deck, longer platforms and roof spanning the river.

At the same time more than 8,000 tonnes of material from deck and pier demolition will also be removed. Barges arrive at Blackfriars on a daily basis.

Materials destined for Blackfriars will be loaded onto barges at Thames Warf near Blackwall. Each barge takes approximately 75 minutes to reach the site where the new steel work is lifted by crawler crane onto the bridge deck.

"The landmark Blackfriars station will be the first in the capital to span the Thames, providing a direct link to the cultural centres on the south bank for the first time," says
Jim Crawford, programme director of the Thameslink project.

"Working directly above the Thames, delivering and removing materials by barge, makes a lot of sense to us both practically and environmentally. We are committed to using this method."

Port of London Authority chief executive Richard Everitt said: "Water and rail are well regarded as the most environmentally-friendly forms of transport, so bringing them together is a winning combination.

"Moving building materials through the capital's marine highway instead of London's crowded roads will result in less pollution and congestion.

"By choosing barges, Network Rail has ensured the new Blackfriars station will have fine green credentials – not only when it's operational, but also while it's being built."

• Last month the SE1 website joined Simon Hughes and Cllr Adele Morris on a visit to the Blackfriars site – see the pictures here.