"If you vote for me you are getting someone who is prepared to speak out," said Kate Hoey who is seeking re-election as Labour member of Parliament for Vauxhall. 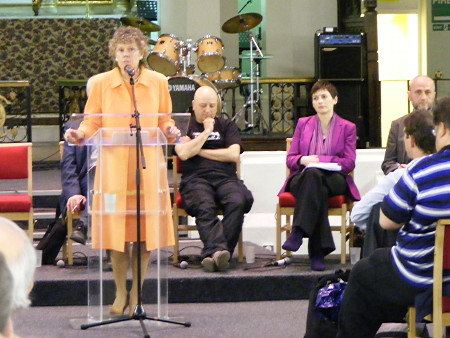 The former sports minister was speaking at a hustings in St Mark's Kennington where candidates in the Vauxhall seat were asked: 'Where does your moral compass come from?'

Whilst most of SE1 is in the Bermondsey & Old Southwark constituency, voters in Waterloo are at the northern tip of the Vauxhall constituency.

At the same time as the parliamentary hustings in Kennington, candidates for Lambeth and Southwark councils were facing questions from voters at St John's Waterloo.

Speaking at the Kennington meeting, Kate Hoey said that she had been taught the values of caring and that sometimes it was good to be able to turn the other cheek.

"I also believe that my moral purpose is served by doing what is the right thing
which sometimes means that you have to be out there on your own when it's easier to go with the flow.

"That is something that I learnt very early on in life. I think that's how I handle my life as a policitian."

Liberal Democrat candidate Caroline Pidgeon, the main challenge to Labour, spoke of the influence of her parents' roles in church and charity work as well as her own experience on the London Assembly and chairing the transport committee at City Hall. She promised to continue campaigning locally and "work incredibly hard as the MP".

"If you want a fair society and a fairer Britain, fair taxes for everyone, a fair chance for every child and a fair future creating jobs improving our environment and a fair deal by cleaning up politics, which is the message I get time and time again, then I would urge you to vote for the Liberal Democrats."

Conservative candidate Glyn Chambers said: "I do believe that there is such a thing as society." He suggested that a strong civic society and strong moral values were better than strong government.

All three main party candidates, including Glyn Chambers, spoke of a Christian background and their opposition to the Iraq War. Kate Hoey recalled that she had voted against the invasion and tried to persuade colleagues to follow her. None of the other candidates spoke in favour of the war.

Green Joseph Healy said that he looked to St Francis of Assisi, William Morris and Tom Paine for inspiration. On economics he added: "We are steadfastly opposed to the progamme of cuts. We believe that the way out of this impass is spending"

Danny Lambert of the Socialist Party said: "You should not vote for us if you do not understand what we are up for and you are not prepared to shoulder the responsibilities and duties to bring it about." He called for "a society where we bring according to our abilities and take according to our needs".

Anticapitalist Jeremy Drinkall said that his policies were proving extremely popular on the doorstep. "We are against the trillion pound bailout which gave our money to the rich bankers and we want to end the war in Afghanistan."

James Kapetanos of the Animal Protection Party said that he was offering the chance of a protest vote and a chance to speak up for animals.

The two-hour event, which attracted more than a hundred people, was chaired by vicar Mike Starkey who was appointed to St Mark's last year. The church stands on Kennington Common where the first Lambeth election was held in 1832.