Mayor of London Boris Johnson has revealed that Southwark Bridge Road could have a 20 mph speed limit as part of the Cycle Superhighway that is currently being built. 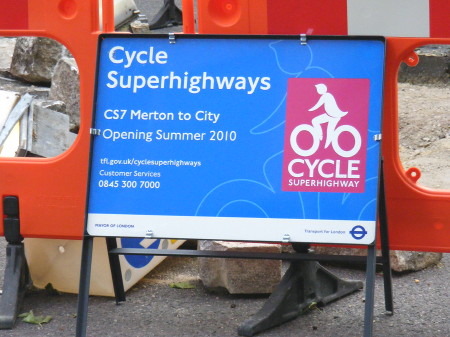 Southwark Bridge Road is part of the Merton to the City Cycle Superhighway which is due for completion in July.

With distinctive blue road markings, superhighways are intended to provide direct and easy-to-follow routes for commuters to cycle into Central London.

The Mayor was questioned by London Assembly member Val Shawcross who asked whether 20 mph speed limits should be considered on all roads forming part of the Cycle Superhighways network.

"A significant proportion of the Cycle Superhighways will be on TfL's road network, which performs a strategic role as it carries around a third of the traffic in London but represents only 5% of the total number of roads," said the Mayor in a written answer published this week.

"A blanket 20 mph speed limit would impact on the ability of traffic to move around London.

"TfL will continue to consider where a 20 mph speed limit may be beneficial at specific locations on the Cycle Superhighways, and is currently reviewing the potential for 20 mph limits on Southwark Bridge Road in conjunction with the London Borough of Southwark."

"Southwark Bridge Road should in my view have a 20 mph limit," says Val Shawcross. "The speed of traffic is a baseline safety concern.

"There are also actually a number of residential properties on this street and the London South Bank University at the Elephant & Castle end, so there could also be benefits for those walking to classes or to their homes too.

"It could become quite a pleasant cycling corridor. I'd be interested in the views of SE1 readers."