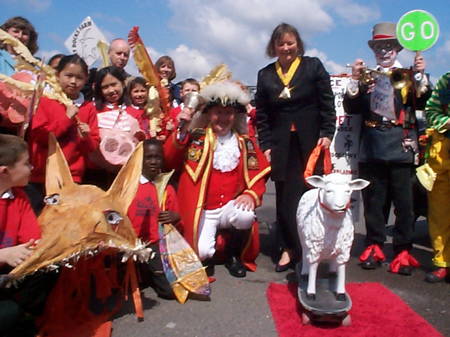 Hilary Wines on Millennium Bridge in 2002

She died in the early hours of Thursday morning at Trinity Hospice in Clapham.

Simon Hughes MP has described her as a "dear friend and hugely valued colleague to many, much loved Liberal Democrat councillor for Cathedral Ward for many years, and wonderful Mayor of the borough".

Cllr David Noakes, chair of Borough & Bankside Community Council, said: "Hilary's hard work, commitment and passion to residents and to Borough and Bankside, as a councillor for the old Cathedral Ward over 16 years, will always be the standard by which other ward councillors are measured and seek to emulate.

"Even though it is eight years since she stood down as the ward councillor, she remains the person and the politician most local people identify with the area. She was a valued confidant and colleague, and I and many other people in Borough and Bankside will miss her deeply."

In 2002 she memorably led a fibreglass sheep on a skateboard on a sponsored walk across the Millennium Bridge.

Among many other local activities, she organised the annual Remembrance Sunday ceremony at the Borough War Memorial in Borough High Street.

Formerly a stalwart of the Church of the Precious Blood in O'Meara Street, in more recent times she had been active in the life of St George's Cathedral where her roles included care for the church's vestments.

• We will publish a fuller obituary in due course.

Post your tribute to Hilary Wines in our forum