The Borough War Memorial and the Soviet War Memorial were the focal points for Remembrance Sunday observances in SE1. 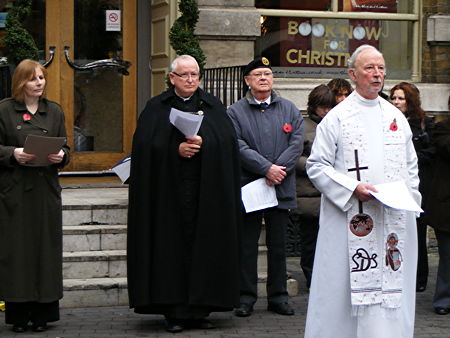 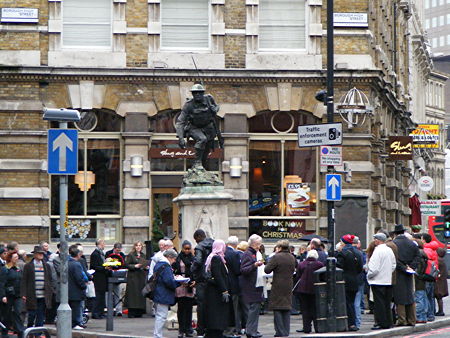 The annual gathering at the Borough War Memorial 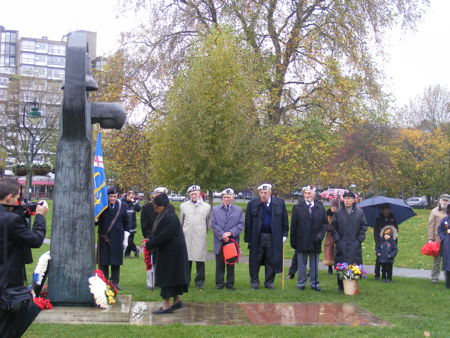 Veterans gather in the rain at the Soviet War Memorial 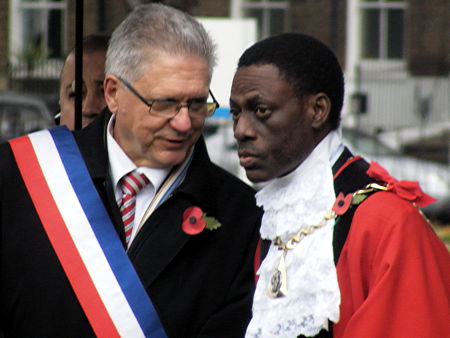 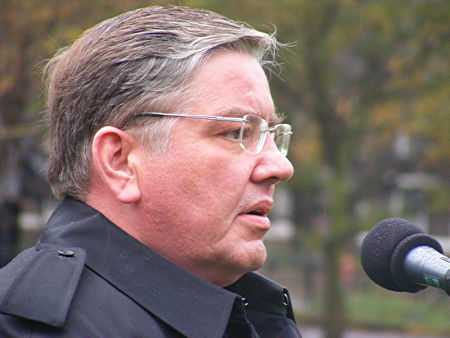 Around a hundred residents gathered at the Borough High Street War memorial on Sunday morning for the annual remembrance of war dead.

Cathedrals ward councillor Adele Morris read a passage from Isaiah before silence fell across the street for the two minute silence during which police held traffic at the Southwark Street and Union Street junctions.

Local armed forces representative Mustapha Fofanah recited the words of Lawrence Binyon,"They shall not grow old; as we that are left grow old", before laying the parish wreath.

Others placing wreaths at the foot of the memorial included Cathedrals councillor Geoffrey Thornton who represented the council's Liberal Democrat Group. Cllr David Noakes laid a wreath on behalf of Simon Hughes MP who was at the Royal Marine Reserve HQ in Bermondsey.

The Kohima Prayer was read by Frank Lyons. Other prayers were led by Fr Ray Andrews of St George the Martyr and Fr Peter Preston of the Church of the Precious Blood.

Before the formal ceremony began Fr Andrews recalled that Hilary Wines and Peter Moore, who both used to organise the annual commemoration, had died during the past year.

Later the Mayor of Southwark and Simon Hughes MP were present at the annual Act of Remembrance at the Soviet War Memorial in Geraldine Mary Harmsworth Park.

They were joined by Gilles Catoire, Mayor of Southwark's twin town Clichy in France.

In his speech the Bermondsey and Old Southwark MP highlighted the new Extraordinary Heroes display at the Imperial War Museum.

Pointing to the museum, Simon Hughes said: "The building here is not here to glorify war. It to remind people how horrible and fatal war is.

"I ... am now in a party of government [and] pledge my colleagues and I to seek to work with all our colleagues around the world to build a future of peace so that we never have the mass slaughter of people on our continent in an armed conflict.

"Your presence is hugely appreciated and the people of Southwark are very honoured that this happens in this borough and on their soil."

Wreaths were laid at the Soviet War Memorial by the Mayor of Southwark Cllr Tayo Situ, Simon Hughes MP, Cllr Mark Glover on behalf of Southwark Labour Group and Cllr Eliza Mann representing local Liberal Democrats. Embassies of many former Soviet republics were also represented, as were many local and Anglo-Russian organisations.

• On Thursday an Armistice Day ceremony was held on board the MV Havengore on the River Thames close to St Thomas' Hospital.

• City Hall's annual service of remembrance was held on Friday. It was led by Canon Giles Goddard of St John's Waterloo and the address was given by the Bishop of Woolwich, Rt Revd Christopher Chessun. Wreaths were laid by the Mayor of London Boris Johnson and the chair of the London Assembly Dee Doocey AM.