Part of the new railway viaduct at Borough Market was lifted into place in Stoney Street this weekend. 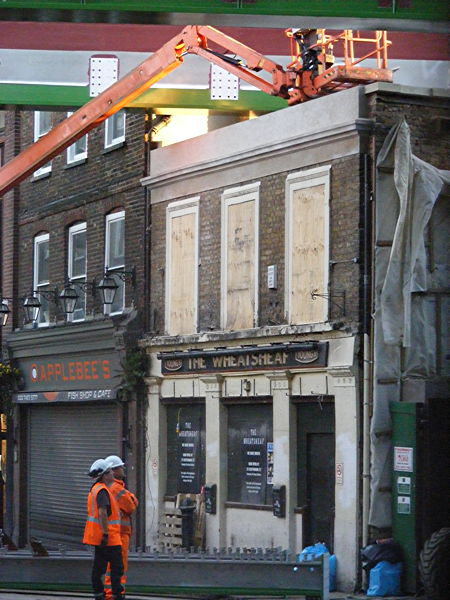 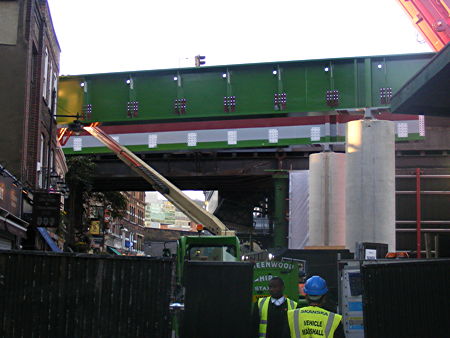 Stoney Street was closed on Sunday to allow the first section of the bridge to be lifted into place.

The bridge works coincided with a mock explosion under the Floral Hall portico as part the filming for Sean Bean's Cleanskin movie.

The new section of bridge sits above The Wheatsheaf pub which has lost its top floor since it closed in January 2009.

The Wheatsheaf has since found a temporary home in the basement of the Hop Exchange round the corner in Southwark Street.

When the Stoney Street pub reopens it will be one storey shorter but will have gained a new beer garden on the site of the adjacent building which was demolished to make way for the new viaduct.

The demolition of historic buildings in and around Borough Market to make way for Network Rail's Thameslink Programme viaduct was the subject of two public inquiries.

This week DLA Architects will present their plans for the site at the corner of Borough High Street and Bedale Street which has also been cleared as part of the Thameslink project. Locals can learn more at Monday night's Bankside Residents' Forum meeting.

The new viaduct at Borough Market is intended to remove the notorious rail bottleneck west of London Bridge Station where all trains to Charing Cross and north to Blackfriars and other Thameslink destinations share just two tracks.

The extra tracks will allow many more cross-London trains to be run via London Bridge.