The first of a series of special London CAMRA heritage pub crawls took place in Southwark on Wednesday night. 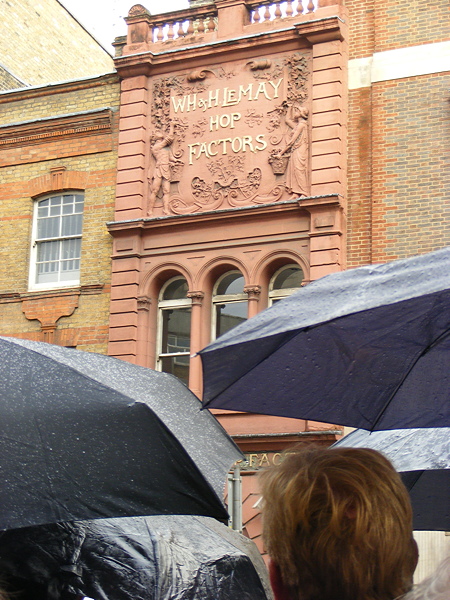 Despite the rain, dozens of walkers enjoyed a guided tour of the Southwark sites associated with the hop trade and brewing industry

The walk on Wednesday evening was part of the Campaign For Real Ale's two month London City of Beer proposition in celebration of the capital's pubs, breweries and beer.

Southwark historian Stephen Humphrey, who met walkers at The Wheatsheaf under the Hop Exchange in Southwark Street, welcomed visitors and a number of local residents to the what he said was the heartland of the capital's hop and brewing heritage.

The tour took in buildings around Borough High Street which were originally inns, breweries or hop factors. The main talk was delivered inside the National Trust-owned George Inn.

CAMRA director Christine Cryne, launching the festival earlier in the month, said: "London was once known as the capital of the world for beer with the exporting of its famous brews all around the globe.

"Research has shown that over 60 per cent of visitors to Britain say that they will visit a pub when they come to visit," she added.

"The beer sponsor for the Olympics is Dutch brewer Heineken but we want to show visitors that we are proud of our British heritage and introduce them to what great beer and pubs we have in the Capital."

The special pub crawl ended at The Royal Oak in Tabard Street which features in the special festival edition of CAMRA's London Drinker magazine as one of 'London's Top Pubs For Food'.

The corner building dates from 1898 and stands on a site which has been occupied by a pub since the 18th century. The street was once the main road into London from Kent and was called Kent Street.

The magazine describes the food at the Royal Oak as "classic British grub with the portions to match". It is one of only two Harvey's pubs in London.

The Draft House in Tower Bridge Road and The Rake in Winchester Walk are highlighted for imported beer.

The crawl included a visit to the Advanced Graphics London gallery in Long Lane to view Alan Kitching's exhibition, Mr Kitching's London, featuring new letterpress prints. The Royal Oak has one of the limited edition Borough prints framed on the wall.