A mosaic that's longer than a bendy bus was unveiled at the Tabard Gardens Community Allotments on Saturday. 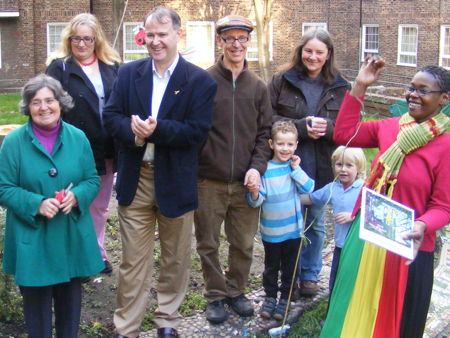 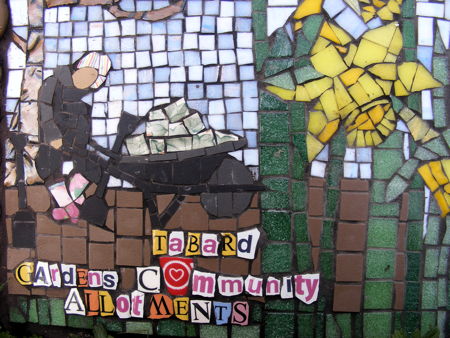 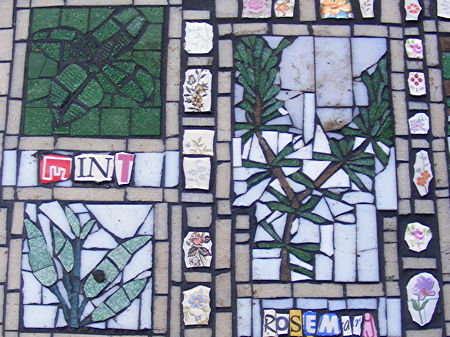 Chaucer ward councillors Tim McNally and Poddy Clark joined residents and friends of the Tabard Gardens Estate for a ceremony to mark the completion of the new spiral mosaic that surrounds the raised herb garden at the community allotments on Manciple Street.

"Too much of our housing land in Southwark is just flat grass with signs saying 'no ball games' so it's really fantastic what's happened here with the creation of the community allotments," said Cllr Tim McNally.

"Most importantly, this is a really great example of building local community – involving people of all ages in the project through planting trees, having their own grow-bags, looking after the communal planting and through this mosaic project which involved lots of young people taking ownership of this space.

"We can genuinely say that this project is an inspiration to others, because the Rockingham Estate are now copying the community allotment project and have just set one up on Falmouth Road."

Back in the spring Jay James of Janet & John Mosaics at Elephant & Castle Shopping Centre ran a series of open workshops at Hankey Hall inviting residents to start making mosaic pictures of bees and caterpillars, favourite fruits and earthy vegetables.

Over the following months Jay wove the small mosaic pieces together into a beautiful design telling the story of the seasons, the local characters, the wildlife and the magic that can be found at the allotments.

The same fund has also enabled thirty families to take part in the one-tonne grow bag scheme this year, set up to give local people a taste of growing salad, herbs and veg for the first time.

• Find out more about the allotments at www.tabardgardens.org/allotment