Preparatory works for the new London Bridge Bus Station will start later this month, Transport for London has confirmed. 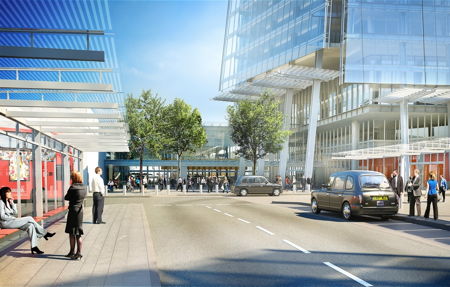 The new look bus station, expected to open in May 2012, will have more space for buses and taxis, improved waiting facilities and an improved road layout to ease congestion.

TfL says that the upgrade, which will also include improvements to the railway station concourse, will make the area more open, attractive and welcoming to passengers.

"Hundreds of thousands of people use London Bridge every day and at the moment using the bus station is a fairly grimy experience," says Kulveer Ranger, the Mayor of London's transport advisor.

"However this work will deliver a landmark station next to a landmark building, with a far better design that will improve both its efficiency and the experience for passengers.

"We appreciate people's patience while work is carried out but can assure them that by 2012 the improvements will be such that the area will be totally unrecognisable when compared to the station we have now."

Preparatory work on the improvements will take place overnight and during the weekends until spring 2011. While the works are being carried out there will be temporary bus shelters installed.

Bus routes and taxis will be able use the bus station as normal although the exact position of stops within the station will change as work progresses.

The new bus station will occupy the same site, but will be rotated by 90 degrees meaning passengers will be able to see departing trains from the bus station.

TfL says that it is working hard to ensure that despite the upheaval most of the bus routes and taxis will be able to use the bus station as normal.

The work will be delivered in two main phases with work to prepare the site and remove the existing canopy carried out between November 2010 and April 2011. The main construction works will take place between September 2011 and May 2012.

The new bus station was approved by Southwark councillors in March this year and is part of a package of measures linked to the Shard skyscraper and the London Bridge Place development next door.

Although improvements to the bus station and railway station concourse are going ahead, there is uncertainty about funding for the other major works required at London Bridge Station in connection with the Thameslink Programme.

Transport secretary Philip Hammond is expected to make an announcement on the future of Thameslink, including the rebuilding of London Bridge Station, in the near future.

Mayor of London Boris Johnson has told local businesses that he has been lobbying central Government to ensure that the London Bridge works get the go-ahead.

""In my opinion, failure to support Thameslink and the delivery of a new station at London Bridge would be short-sighted and have knock-on impacts for continued regeneration not only of this part of London, but London's economy as a whole," said the Mayor.