Every Friday morning for the past 62 years antiques have been bought and sold in Bermondsey Square. A new film by Kevin Dolan explore the past and present of the New Caledonian Market. 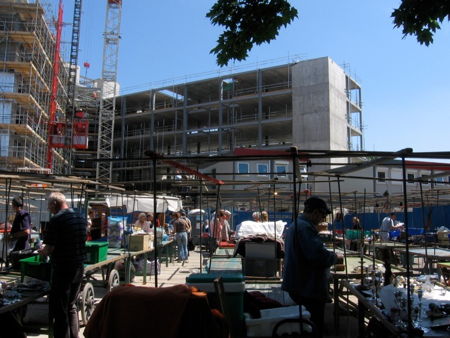 Kevin Dolan's film records a key period in the market's history as a new offices, flats and a hotel were built around the square

The 29-minute film – called Market – received its premiere at the Bermondsey Street Festival in September and now there are two further opportunities to see it.

Local resident Kevin Dolan began work on the film back in 2006 just as construction of the Bermondsey Square development was getting under way.

Kevin started to talk to the stallholders at the Friday morning antiques market and soon found himself coming back again and again, learning about the traders' stories and the history of the market.

He sees the film as a valuable record of a slice of London's social history.

"The film starts four years ago and then it delves back into the history," explains Kevin.

"It goes back to the early part of the 20th century when the market was in Islington and it was called the Caledonian Market.

"We've managed, with the help of ITN Source, to get some really good archive footage of that market, and the Museum of London have given us some really good historical photographs from about 1905."

The film then jumps forward to 1948 when the market relocated to Bermondsey, and then tells the story of the market's recent transformation from the archaeological dig in 2006, through the upheaval of the building work to the present day.

Kevin shot 30 hours of footage for the 29-minute film and faced some tough choices about what to include in the finished product.

"I could have talked about the development in more detail, but every time I strayed away from the market it lost focus, so I always brought everything back to the market, the stallholders and their voices and stories," he says.

The market used to be famous for the legal concept of marché ouvert which meant that stolen goods could be legitimately resold.

"The very last case was in 1994 when someone bought a couple of paintings for a couple of hundred pounds, took them to an auction house and it turned out one of them was a Joshua Reynolds painting," says Kevin.

"Apparently, because of 'open market', he was able to keep them because that statute was still on the books.

"That was the straw that broke the camel's back – the Metropolitan Police lobbied for it to be removed and that was taken off the books in 1995."

During the last four years Kevin has seen the market get smaller and less busy, but he says there's no discernible pattern to the market's rapidly changing fortunes.

"You can talk to the market stallholders one week and it will be a terrible week, and the next week – even though it's been pouring with rain or snowing – they'll have a great day," he explains.

"I think the biggest challenge to the market now is that there are not enough young people coming into the trade. That's a critical thing."

The near disappearance of the antiques warehouses that once lined Tower Bridge Road and Long Lane means that there's no longer a daily antiques trade presence in the immediate vicinity of the market.

He says that Southwark Council's decision to appoint a private company to handle the market has provided more focused management, but there's still a problem with advertising the presence of the market.

"What's interesting is that Bermondsey Antiques Market now sits enclosed in this modern square, and unless you search it out, you can't see it and you don't know that it exists," says Kevin.

Kevin believes that the advent of online auctions and antiques sites has had a profound effect on the Friday market.

"Time and again the stallholders say that eBay has taken a huge chunk out of the market," he says.

"But as they say in the film, these things come in cycles and people like to look at and handle goods and talk to people."

Visitors to London from around the world still make a beeline for Bermondsey in the early hours of Friday morning and Kevin believes that despite all the changes in recent years the essence of the market is still strong.

• You can see Market at the Shortwave Cinema in Bermondsey Square on Wednesday 1 December at 7pm. Admission is free.