A coalition of campaign groups staged a demonstration outside St Thomas' Hospital on Friday evening in solidarity with workers arrested last month for identity offences. 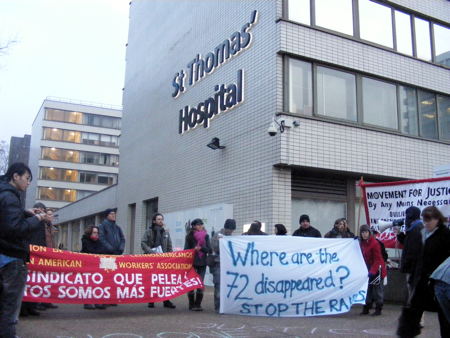 16 people were arrested by the police and the UK Borders Agency on Thursday 6 January in connection with fraud and identity offences at Guy's and St Thomas' NHS Foundation Trust.

Three of the arrested workers – a cleaner, a porter and a catering assistant – pleaded guilty to obtaining a pecuniary advantage by deception and being in possession of false identity documents. They were each sentenced to eight months' imprisonment the day after the arrests were made.

The Cleaners Defence Committee, No One Is Illegal, Hands off my Workmate and Latin American Workers' Association staged a protest outside St Thomas' Hospital during Friday evening's rush hour.

The campaigners claim that as many as 72 ancillary workers at the two hospitals have 'disappeared' in the last month.

The demonstration included chants of "No borders! No nations! Stop deportations!"

"We have worked closely with them in following these matters up.

"We were disappointed that this problem arose, as we pride ourselves on carrying out thorough immigration and employment checks on all our staff. The majority of those involved were employed through an agency.

"Clearly the trust has no alternative but to uphold the law in these cases."

The guard told them that the hospital grounds were private property and they could not continue to shoot video and take photographs.

A police officer calmed the situation and the photographers were able to continue their work unhindered.