The congregation of St Hugh's in Bermondsey has said farewell to its church building with an outdoor service and a procession. 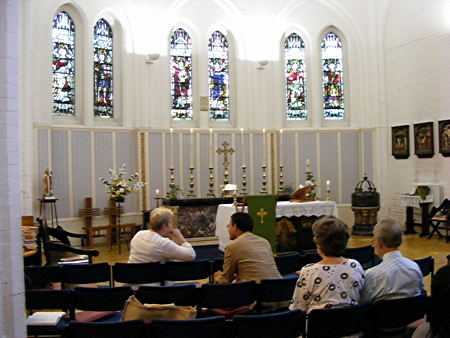 The congregation assembles for the penultimate service in the existing church 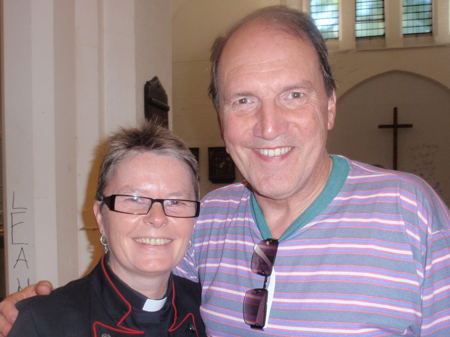 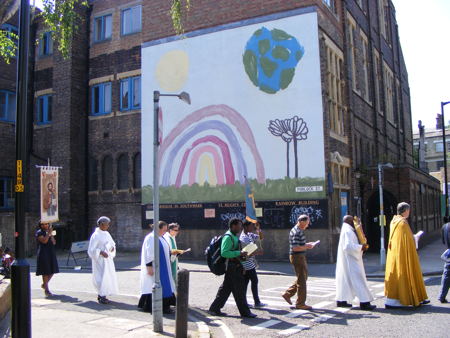 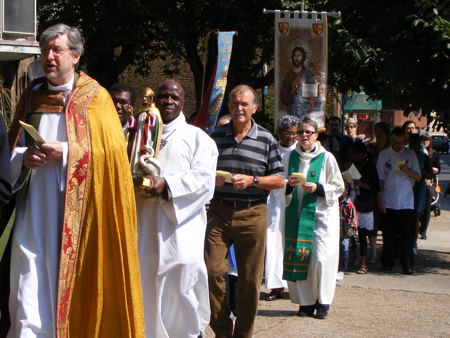 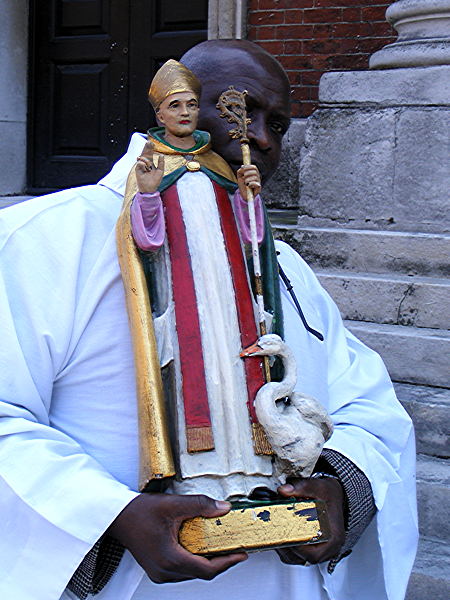 The statue of St Hugh of Lincoln, dating from 1898, is carried in procession to St George's

The Sunday morning procession began gathered across the road from the church door in Porlock Street. The Archdeacon of Southwark led prayers and hymns were sung as the procession moved off along Crosby Row and Long Lane towards St George the Martyr Church.

St Hugh's congregation will worship at St George's until a new church is built on the site of the old.

St Hugh's was one of the final works by the Richard Carpenter and Benjamin Ingelow architectural partnership. They were also responsible for Denstone College chapel and the Chapel Court at Jesus College, Cambridge.

The church in West Bermondsey was built in 1898 as a mission of Charterhouse-in-Southwark to include club rooms on upper floors and a rooftop playground. More recently it has been known as the Rainbow Building.

Charterhouse-in-Southwark was founded in 1885 by Old Carthusians, past pupils of Charterhouse School, to work alongside Southwark residents offering care and support.

The final services inside St Hugh's were held on Sunday 26 June. Among those at the crowded Sung Eucharist was George Byron who recalled being on the roof of the church building in 1934 as part of a gym demonstration.

This was given in front of the Duke of Gloucester, son of the reigning King George V. The Royal visit was part of the 50th anniversary celebrations of Charterhouse-in-Southwark.

"This is a very unusual experience today," said Bruce Saunders, Southwark Cathedral canon pastor, in commenting on the church closing. He was looking forward to rebirth with the new church.

"God is not only in one place," he added. He said that they were taking Jesus with them to the temporary church and invited the congregation to share their ideas for their final prayers together in the old building.

The very last service, held later in the day, was also attended by people who had been involved in Charterhouse clubs within the building and known services over many years in the ground floor church.

The Charterhouse charity withdrew from Southwark in 2008. The stone cross on the west front is being removed before demolition begins next month. It will be cleaned and placed in the grounds of the original Charterhouse monastery in Smithfield.

The new development on the site of the Rainbow Building will include 22 flats as well as a new worship and community space for St Hugh's.