Borough High Street's new railway bridge will be moved into position over the May Bank Holiday weekend - but it will be at least five years till the first train runs across it. 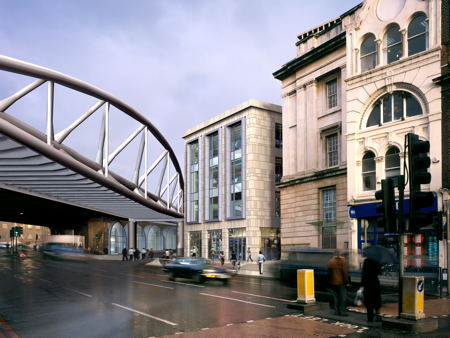 How the bridge will look when completed 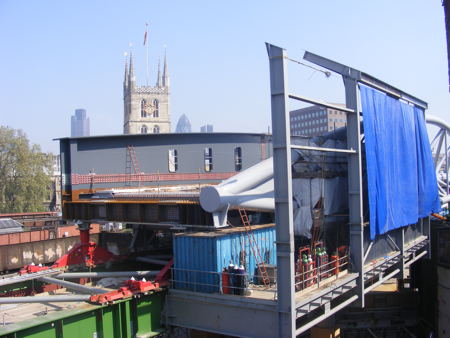 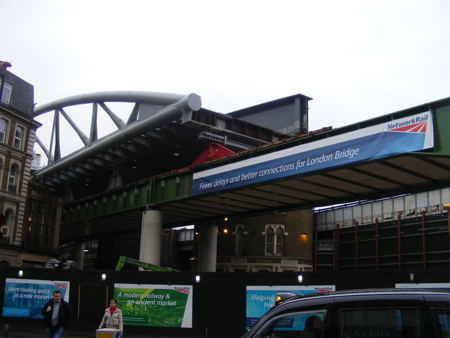 Over recent months shoppers at Borough Market and commuters on passing trains have watched the 72-metre bridge take shape high above the new viaduct that has cut through the heart of the historic market.

The steel sections have been welded together on a high level platform behind the main entrance gates to Borough Market and slowly moved towards the high street on Teflon pads.

Now the completed bridge is ready to be launched into its final position across the main road.

Borough High Street will be closed from 2am on Saturday morning – after Royal Wedding revellers have dispersed – to allow traffic lights and traffic islands to be moved out the way and a level surface created for the bridge slide which is expected to start on Saturday evening.

The bridge will move a few inches each minute until it is ready to be lowered onto its new supports in Railway Approach on the eastern side of the high street.

The trapezoidal girders are intended to create a striking new gateway to the City of London at the northern end of Borough High Street.

The design for the south-facing side of the bridge was chosen for aesthetic reasons after two public inquiries which considered the impact that the new viaduct – originally part of the Thameslink 2000 project – would have on Borough Market and its environs.

Although rail passengers won't see any benefit from the bridge until the new track layout and signalling is introduced in 2016 or 2017 as part of the rebuilding of London Bridge Station, the completion of the bridge means that the streets around Borough Market should be restored to tranquility in time for the Olympic Games next summer.

The new glazed market hall at the corner of Borough High Street and Bedale Street will take shape over the next year – the glass panels are already on order from China – and The Wheatsheaf's new beer garden on Stoney Street can also be completed.

Once the Olympics are over, attention will turn to the works east of Borough High Street to connect the new bridge to the remodelled London Bridge Station.

Rail bosses haven't chosen a name for the new bridge: with the installation taking place over the Royal Wedding weekend, Princess Catherine Bridge is one of the top suggestions so far.

The northern end of Borough High Street will be closed to traffic and pedestrians from 2am on Saturday 30 April to 5am on Tuesday 3 May. London Bridge Bus Station will also be closed, with many diversion and alterations to bus services. Routes 21, 35, 40 and 133 will be diverted southbound via Southwark Bridge. Westbound buses on routes 381 and RV1 will be diverted via Bricklayers Arms.