Around 2,000 people attended a May Day Mass at St George's Cathedral on Bank Holiday Monday. 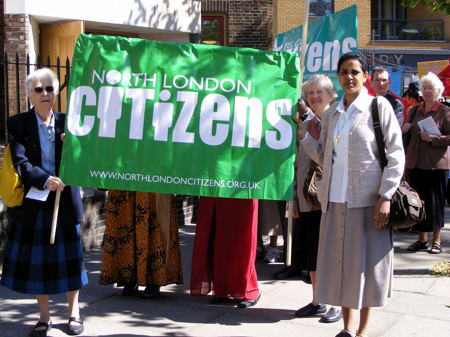 The Mass was preceded by a procession of groups carrying banners 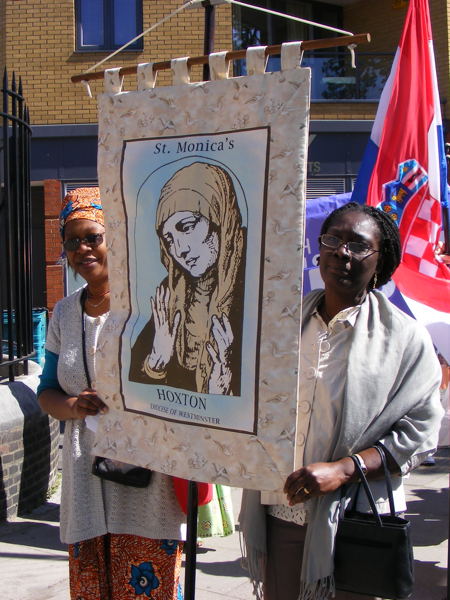 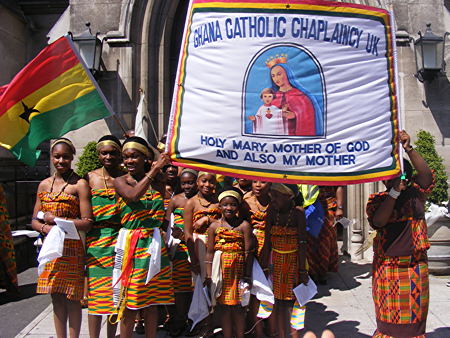 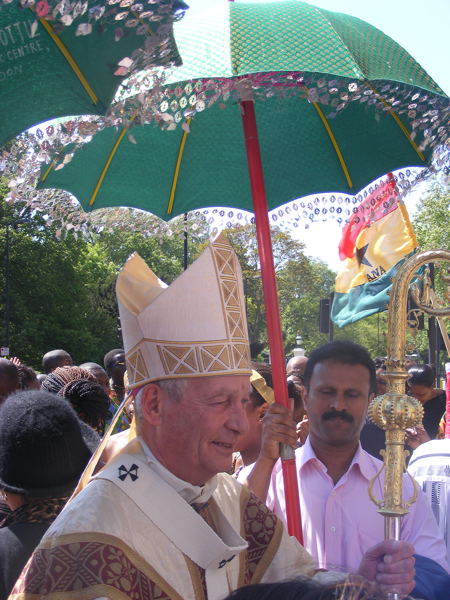 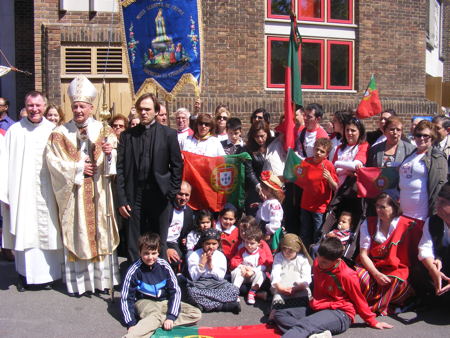 Archbishop Peter Smith with representatives of the Portuguese community

This was the sixth annual Mass for migrants living and working in London and the first time that the venue had been Southwark and not Westminster Cathedral.

The Mass, marking the feast of St Joseph the Worker which falls on May Day, was celebrated by Archbishop of Southwark Peter Smith with over fifty priests concelebrating. Present were many from London's Catholic ethnic chaplaincies.

In his sermon, Bishop of Brentwood Thomas McMahon highlighted the campaign for a Living Wage which this year reaches its 10th anniversary.

"The first prophetic call for a Living Wage was by Pope Leo XIII in 1891 when he spoke out against the treatment of labour as a commodity."

The Bishop, having been given Cardinal Manning's chair to sit on, recalled that the 19th-century cardinal was known as the friend of workers and had said "A worker's wage should be sufficient to keep his wife and children, to provide them with decent housing and a healthy diet and to educate them."

"Since then the Churches and especially Catholic Social teaching have always focused on the person and called for dignity and justice for the worker," said Bishop McMahon. "On the other hand the market always focuses on profit and how to maximise gain."

The congregation included the Trinidad and Tobago High Commissioner and ambassadors from Ireland and Portugal. Cllr Tina Valcarcel, Mayor of Lambeth, was also present.

Afterwards Bishop McMahon led a procession with banners to a Citizens UK assembly at Westminster's Central Hall to celebrate the tenth anniversary of the Living Wage campaign.

Mayor of London Boris Johnson announced on Monday that the London Living Wage will this year increase by more than five per cent to £8.30 per hour – up 45p on last year's figure.

More than 100 London-based employers have now signed up to the London Living Wage which was introduced in 2005 under the City Hall administration of Ken Livingstone.

The concept was adopted by Boris Johnson when he became Mayor in 2008.

“Decent hard working Londoners deserve proper reward for their labours, and I'm delighted that a growing number of organisations recognise that it suits them as well as their staff to pay the London Living Wage," said Boris Johnson on Monday.

"It really is a win win for employers as paying a fair wage fosters a loyal and motivated workforce, while at the same time continues to help pull many Londoners out of poverty and boost the capital's economy.

"Already many major employers have joined us in signing up and I urge others to look seriously at the benefits and join this important crusade.”