LSBU has change of heart and adopts Living Wage policy

London South Bank University has announced that all employees - and those working for its subcontractors and suppliers - will in future earn at least the London Living Wage of £9.40 an hour. 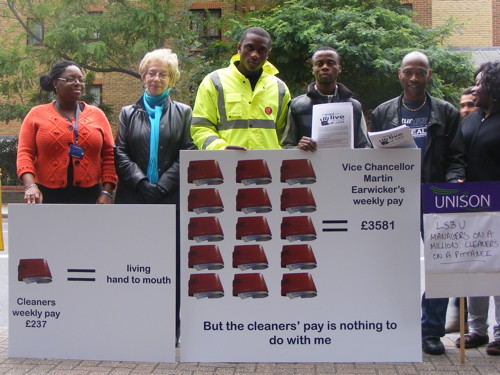 Four years ago the university faced protests from trade unions calling for the London Living Wage to be paid to cleaners. At the time cleaners were earning just Ł6.08 an hour.

In 2011 LSBU management said that contractors' pay arrangements were not its responsibility, but now the university has had a change of heart.

"London South Bank University seeks to provide an environment for staff in all roles to be creative and empowered to deliver," said chief operating officer Ian Mehrtens.

"We aspire to attract and foster the very best staff who take pride in their university, and take responsibility for its development.

"Becoming a Living Wage employer is a proud moment for London South Bank University and sends a clear message that we value our staff highly."

"It is wonderful to see London South Bank University taking a lead and involving the whole community in this step.

"The best employers are voluntarily signing up to pay the Living Wage now. The Living Wage is a robust calculation that reflects the real cost of living, rewarding a hard day's work with a fair day's pay."

News of LSBU's decision to adopt the London Living Wage came on the same day that Mayor of London Boris Johnson announced that the rate – calculated by City Hall economists – has risen from Ł9.15 to Ł9.40 an hour.

"As our economy continues to grow and employment in London increases, it is essential all hardworking Londoners receive a fair share of the proceeds of the capital's success," said the Mayor.

"I have long argued that those companies that can afford to pay the London Living Wage should do so because there are clear benefits for employers in increasing productivity and reducing staff turnover, while it makes a real difference to the quality of life for employees.

"I encourage businesses in the capital to follow the example of Lidl and Oliver Bonas and pay their staff the London Living Wage."

"And alongside this, the working poor face the threat of the Government's proposed cuts to tax credits.

"It's clear that in-work poverty has become a shameful blight on our city, and neither the Government nor the Mayor are doing enough to turn things round.

"We have seen an increase in the number of low-paid jobs under the current Mayor – a trend I am committed to reversing.

"I want to make London a Living Wage City – one in which everyone who does a hard day's work gets a fair day's pay."