Dozens of cyclists staged a slow 'flashride' across Blackfriars Bridge on Friday morning in protest against Transport for London plans they fear will make the bridge less safe. 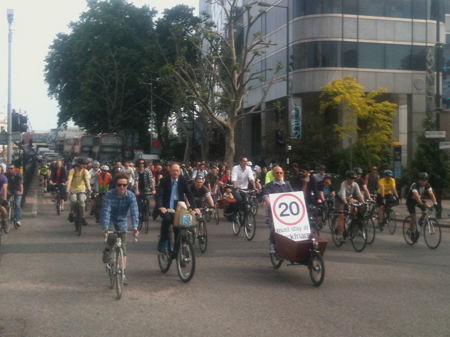 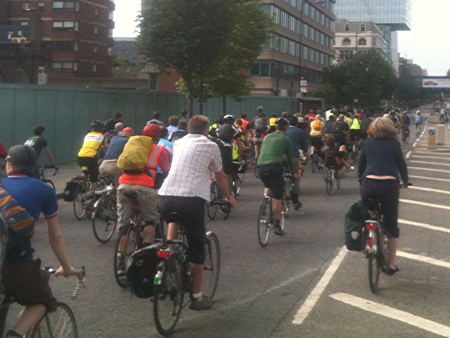 The event, organised by the London Cycling Campaign, comes just days after Transport for London announced that it had revised its controversial plans to remodel the road layout at the northern end of the bridge to coincide with the completion of the rebuilding of Blackfriars Station.

TfL's review, which was brought about by pressure from activists and politicians of all parties, concluded that the northbound cycle lane outside Blackfriars station could be widened to 2 metres and the 1.5-metre southbound cycle lane – identified for removal in the original design – could be retained after all.

Although groups such as the London Cycling Campaign have welcomed TfL's partial change of heart, they are worried by the proposed 30 mph speed limit where a 20 mph limit currently applies.

Participants in Friday's flashride gathered outside the Doggett's Coat & Badge pub before riding slowly north and then south across the bridge, ending at Transport for London's Palestra offices in Blackfriars Road.

"I am very pleased that TfL has taken the feedback from cyclists who use this junction into account and used their comments to deliver the best scheme possible," said Boris Johnson, Mayor of London.

"The changes they have made support my desire to improve the facilities for cyclists right across the capital."

Liberal Democrat London Assembly member Caroline Pidgeon said: "The new plans for Blackfriars Bridge are to be welcomed and ensure that there is a cycle lane southbound for the hundreds of cyclists who use the bridge. I am delighted that TfL has listened and seen sense on this issue."