Cathedral packed for funeral of Mayor of Southwark Tayo Situ

Over a thousand people crowded into Southwark Cathedral on Monday morning to say farewell to Tayo Situ, Mayor of Southwark, who died earlier this month. 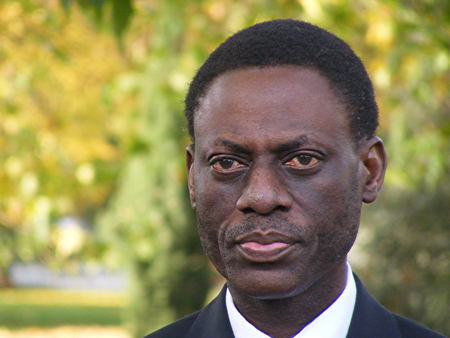 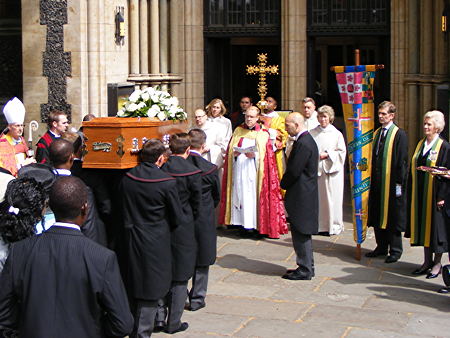 Tayo Situ's coffin is received at the cathedral door by the acting dean, Canon Andrew Nunn 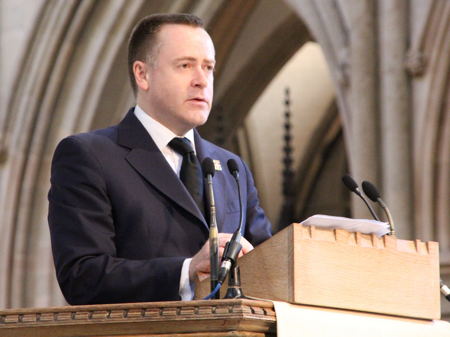 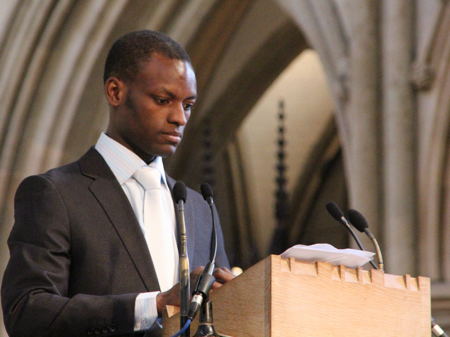 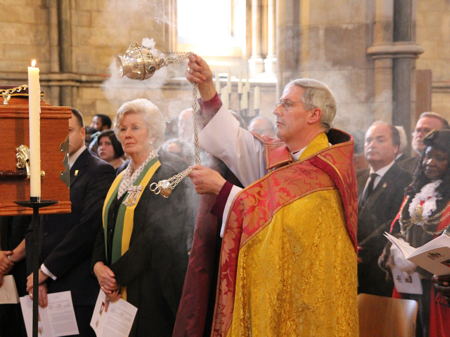 The body was received at the south door by Canon Andrew Nunn, the cathedral's acting dean. On entering the church, the coffin was preceded by the borough standard and the mace held reversed.

Later Cllr John, standing in the pulpit, spoke of the integrity, warmth, humour and devotion to causes of "our friendly mayor" who had come to Southwark from Nigeria. He cared about family, church, community and borough and had been taken from us too early.

"For six years he was our lead spokesperson on equality issues," said Cllr John.

"He was not an advocate for special treatment or excuses or privileges for any section of our community. He merely asked that where there was an injustice we should do all that we could to put that right."

Cllr John revealed that Tayo Situ had been a reluctant mayor who needed persuading to accept office.

The Bishop of Southwark Christopher Chessun recalled being told that Tayo Situ prayed for him and his ministry daily. "Those words cut deeply into my soul and they resonate powerfully within me today," Bishop Chessun told mourners.

"Whenever Tayo and I talked together he wanted to take the opportunity to dwell and reflect on God's love for us in Jesus Christ which for him had one compelling consequence. Whatever he might achieve in this life, he prayed for grace always to look beyond his own achievements to give glory to God.

"Tayo had a deep respect for other faiths and indeed for those with a more secular mindset than his own. We agreed that the borough was enriched by all its diversities. However for Tayo, he drew his vision from his Christian convictions and his energy from responding to the needs of the borough community, which he was proud to serve later as Mayor."

Referring to the 'United to Serve' motto on the Southwark coat of arms, Bishop Christopher said that it had something to say to everyone.

"For that imperative to work for the common good transcends barriers of party, race, faith identity and belonging. We need more fine role models like Tayo to move us on from self interest to costly service for the good of others."

Tayo Situ's widow Abike was supported by members of the family. Her son Michael, elected last year as a Southwark councillor, described his father as his "political mentor". Her daughter Victoria read the Gospel.

The passage from Ecclesiasticus, beginning 'Let us now sing the praises of famous men', was read by Harriet Harman MP.

Also present were Simon Hughes MP and former Southwark councillors Susan Elan Jones and Alison McGovern who now sit in the House of Commons. Several London boroughs were represented by their mayors.

The congregation, so large that some people had to sit in the retrochoir at the cathedral's east end, included members of the Nigerian community as well the Mayor's own church, Christ Apostolic, in Bermondsey.

Last week's Council Assembly was postponed until Tuesday when Cllr Lorraine Lauder will be installed as Mayor.