Singers were on top of Southwark Cathedral's tower early on Thursday morning to celebrate Ascension Day. 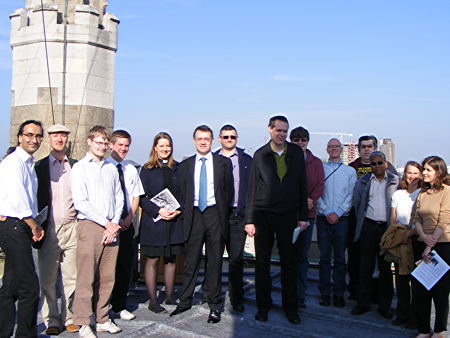 The special day, the fortieth day after Easter, recalls Christ making his final appearance to his disciples by withdrawing from them on high ground outside Jerusalem.

It is a tradition for choirs to sing high up on towers as part of Ascension Day celebrations. Early in the 20th century the children of Southwark's Cathedral School used to be allowed to climb the tower on Ascension Day.

This year sixteen people made the climb up the Tudor tower at 7.30am to sing the hymn Hail the day that sees him rise.

The Revd Anna Macham, the succentor, read the account of the Ascension from the Acts of the Apostles. The final hymn was All hail the power of Jesu's name.

Enjoying the early sunshine, the congregation was able to note the changes in the Southwark cityscape since last year by looking across at the partly completed Shard and down on to the new railway viaduct across Borough Market.

The cathedral's main Ascension Day services were due to be held at 12.45pm and 5.30pm.

In the afternoon All Hallows-by-the-Tower was planning to maintain its own Ascension Day tradition by taking to the water to beat its parish boundary with St Mary Magdalen, Bermondsey, in the middle of the River Thames.