Cleaners at London South Bank University have staged a protest over poor pay and conditions. 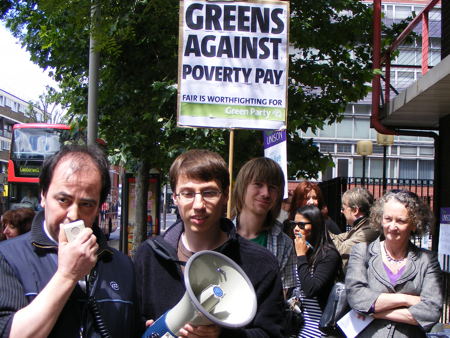 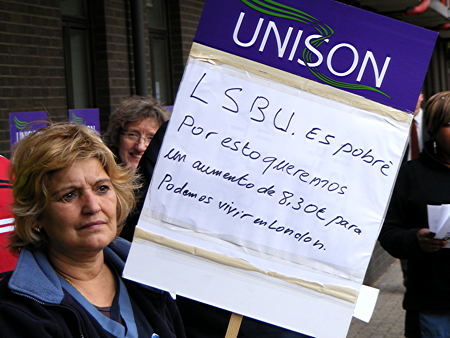 An ISS cleaner holds a placard in Spanish calling for LSBU cleaners to be paid Ł8.30 an hour "so that we are able to live in London"

Some university staff joined the cleaners outside the LSBU Technopark in London Road at lunchtime on Tuesday to call for on the vice-chancellor Martin Earwicker to put the London Living Wage in place. The workers currently do not get paid when they are sick.

The demonstrators were joined by Green Party London mayoral candidate Jenny Jones AM who had earlier written to the vice-chancellor urging him to follow the example of several University of London colleges.

"It is morally reprehensible to pay cleaners in London the national minimum wage of Ł5.93 per hour," she said.

"This hourly rate is Ł1.32 below the poverty threshold and Ł2.37 below the London Living Wage, which would enable them to attain a decent, if very basic, standard of living."

The demonstration was also addresed by UNISON's local rep Jonathan Buckner who said: "We believe that it is fundamentally wrong that any member of staff should be paid poverty wages, and that at an institution where the ten highest paid individuals take home a collective basic salary in excess of Ł1,000,000 annually, it is entirely possible to provide our lowest paid members of staff with the London Living Wage of just Ł8.30 per hour."

The gathering took place outside the building where the university's executive committee was due to meet later in the day.

Alice Dawnay of UNISON London Region said that as the contract with ISS was due to be re-tendered it was "the perfect time" to have the London Living Wage included in the new agreement.

A university spokesperson said: "LSBU reviews all contracts and their conditions on a regular basis and remains committed to ensuring that all employees of LSBU receive a fair and equitable remuneration commensurate with their roles and responsibilities.

"Where external contractors are used to provide a service for the university, LSBU would request that all enquiries regarding those employees are directed to the company concerned."

We have invited ISS to respond to UNISON's campaign; this article will be updated if we receive a response from the company.