Mayor of Lambeth Christiana Valcarcel has walked from the Town Hall in Brixton to the Evelina Children's Hospital as part of a fund-raising campaign. 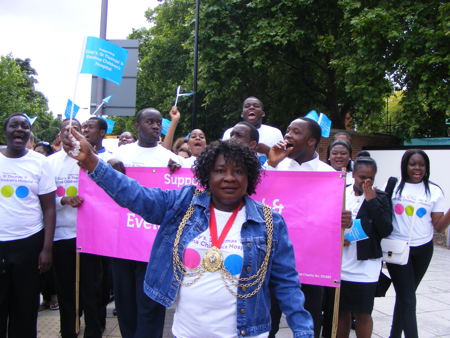 The hospital, attached to St Thomas', is one of the mayor's charities for this year.

Accompanied by young people from Brixton setting the pace, Cllr Valcarcel left her Town Hall at 1pm on Wednesday taking a hundred minutes to reach the hospital in Lambeth Palace Road.

"Thank you so much. I love you all," she told her fellow walkers on arriving at the hospital entrance at 2.45pm.

The walk was intended as not just a sponsorship opportunity but a profile raising occasion ahead of further events.

The Evelina Children's Hospital was this week praised by the prime minister for the way it looked after his late son Ivan. David Cameron made the references to the Evelina in an unscripted addition to his speech on health service reform during a visit to Guy's Hospital on Tuesday.

Ali Carter has been instrumental in organising Evelina Children's Hospital Kilimanjaro Trek 2011 which she will be taking part in this month. The aim is to raise Ł400,000 for new and much needed equipment at the children's hospital.

42 members of staff will trek 19,344 feet up Mount Kilimanjaro during June and July for ten days. The team will take annual leave to make the climb and several hope to stay on afterwards in order to visit local hospitals.

"We're raising money to buy much needed equipment including electronic equipment for the Paediatric Intensive Care Unit, incubators for the neonatal unit (including one that can be used to transport babies from other hospitals) and specialist pieces of equipment for our surgeons to use in the operating theatres," explains Dr Frances Flinter.

"It's going to be a tough but amazing experience, every pound donated will help us get nearer the summit."